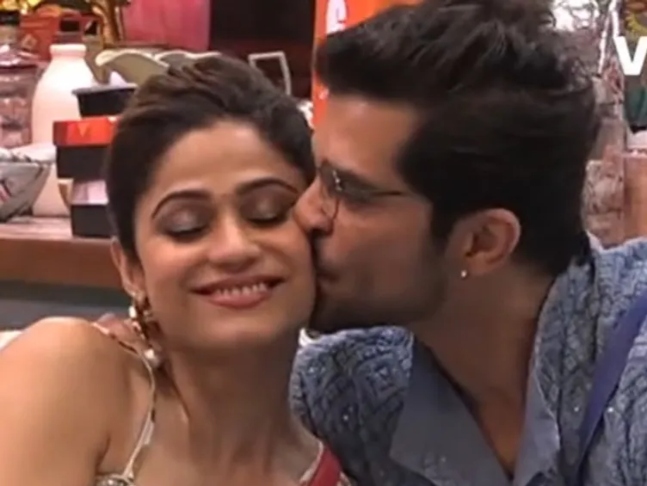 While Shamita Shetty is in the Bigg Boss 15, Raqesh Bapat is her biggest cheerleader outside. Before she entered the house, the actor shared a mushy reel on Instagram and wished her good luck. In a recent episode of Bigg Boss 15, Shamita said she was missing Raqesh. Following her co-contestant Jay Bhanushali's instruction, she said, "Aaho, aaika na," like a Marathi bride. The actress turned red as she couldn't stop blushing.

The video was shared on Shamita's Instagram handle. Fans loved the fun banter between the actress and Jay. Raqesh, who is rooting for Shamita, reacted to her "Aaho, aaika na," and dropped in a comment. He wrote, "Hooo aaikla. kanda pohe awaits (sic)"

In the episode aired on Monday night, Shamita was seen chilling with her Bigg Boss 15 housemates Jay, Tejasswi Prakash, Vishal Kotian, Umar Riaz, Vidhi Pandya and others. She shared with them that she missed Raqesh. Jay went on to tease Shamita by teaching her how to be a Maharashtrian wife. He made her say "Aaho, aaika na". Tejasswi told Shamita that a new Maharashtrian bride prepares pohe for her partner.

Jay went on to tease the actress and called her Shamita Shetty Bapat. She ran behind Jay to hit him.

Bigg Boss 16: Tina Datta and Nimrit Kaur Ahluwalia feud over their behaviour in the house; Priyanka Chahar Choudhary claims she is better suited for ticket to finale