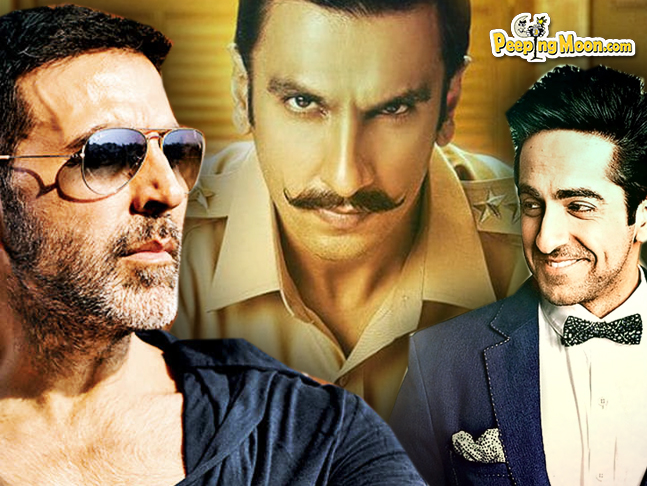 The year is coming to a close and the last notable film, Rohit Shetty's Simmba, released yesterday. Ranveer Singh is the leading man of the show and incidentally, he was the one who kick-started Bollywood's campaign right at the onset of 2018 as well when his Padmaavat hit the screens. While one waits to see the kind of business the film does at the box office, rest assured Ranveer would have quite a bountiful year ahead.

Meanwhile, the man who has sold maximum tickets in 2018 stays on to be the 'one man industry' in himself, Akshay Kumar. Believe it or not but between his three films - 2.0, Gold and Padman, the superstar has sold tickets worth Rs 600 crore already. That after one deducts the entertainment tax and accounts for only net collections. The Akshay Kumar-Rajinikanth starrer 2.0 is the biggest of them all, what with Rs 420 crore coming in collections. Out of these, while Rs 190 crore would be the final haul for the Hindi version, the rest is from the Tamil and Telugu versions. This also turned out to be Akshay Kumar's biggest grosser ever as his last big outing was Toilet - Ek Prem Katha which had netted Rs 134.25 crore. Meanwhile, his Gold collected Rs 105 crore, though it would certainly have done more if not for the clash with Satyameva Jayate. On the other hand, PadMan was his most acclaimed film of 2018 though it stood lower at Rs 82 crore.

Nonetheless, as an actor who has been an integral part of the film industry for more than a quarter of the century, it is his consistency in the business which is paying off in a huge way. There is a certain 'minimum guarantee' that his films come with which makes filmmakers, exhibitors, and distributors breathe easy while also giving a vote of confidence to the audiences. This was pretty much evidenced in 2016 as well when Akshay Kumar was the top scorer among all superstars with Airlift (Rs 129 crore), Rustom (Rs 128 crore) as well as Housefull 3 (Rs 109 crore) scoring a century each and bringing in cumulative numbers of Rs 366 crore. Later in 2017 too Akshay Kumar scored well with two back to back centuries, Jolly LLB 2 (Rs 117 crore) and Toilet - Ek Prem Katha (Rs 134.25 crore), which brought in Rs 251.25 crore collectively.

While as a veteran superstar Akshay Kumar continues to impress, the ones who didn't were the three Khans. Each of them had just a release each and none of these went on to cover much of a distance. Salman Khan was the first one to throw a shocker as Race 3 was panned by one and all. Due to a huge opening day and the Eid holiday, it still managed to bring in Rs 169 crore. However, Thugs of Hindostan had only one good day going in its favour, the opening day, post which it was all downhill, with only Rs 150 crore coming across all languages.

SRK in a poster of Zero[/caption]

As for Shah Rukh Khan, his Christmas release Zero didn't even take an opening and then couldn't jump over the weekend. It has managed to gain some advantage from the festive season though it looks unlikely that it would manage to go past the Rs 125 crore lifetime.
Considering the fact that each of the three Khans was expected to score at least a double century each with their latest release, this has been an underwhelming performance by all of them.

Ranveer Singh in asn Simmba (L) and Khilji in Padmaavat[/caption]

Thankfully the young superstars have been impressive in 2018. Ranveer Singh's Padmaavat scored Rs 302 crore and now his Simmba is expected to do Rs 125 crore in the worst case scenario. That would mean the Band Baaja Baaraat lad has come a long way, with tickets worth more than Rs 425 crore being sold.

Ranbir Kapoor in and as SANJU[/caption]

As for Ranbir Kapoor, his Sanju alone did Rs 342.53 crore which stays on to be the biggest haul from a single Hindi film by an actor this year. There has never been any question about the immense talent that the fourth generation Kapoor carries and one just hopes that his choices from this point on continue to pay off in 2019 and 2020 as well.

Talking about choices, the one who seems to be clearly having the Midas touch is Ayushmann Khurranna. If last year was about Bareilly ki Barfi and Shubh Mangal Savdhan, this year has been even better with Badhaai Ho and Andhadhun. Both the films presented him in a different light altogether and required Ayushmann to bring on different facets of his personality. Well, he did well and audiences complied as well, with Badhaai Ho turning out to be a blockbuster at Rs 138 crore and Andhadhun exceeding expectations at Rs 75.60 crore. In the process, the Vicky Donor star has managed to sell tickets worth Rs 203.50 crore.

Tiger Shroff in a still from Baaghi 2[/caption]

Yet another huge feat that made heads turn was the one scored by Tiger Shroff when his Baaghi 2 took a universally bumper opening all over. Not just that as it sustained quite well too, what with the action entertainer bringing on Rs 166 crore. So far, it stays on to be highest haul that a newcomer has scored in his first five films itself.

Talking about newcomers and youngsters, Rajkummar Rao has pretty much come into his own in the commercial arena. His Stree was a testimony of that as it entered the Rs 100 crore club and emerged as a blockbuster. His other releases like Fanney Khan, Love Sonia, 5 Weddings and Omerta may have gone unnoticed but the Rs 130 crore haul of Stree has been solid enough to give the industry a good option to explore.

Ditto for Kartik Aryan who, after the twin success of Pyaar Ka Punchnama series, scored Rs 109 crore with Sonu Ke Titu Ki Sweety and is now looking at an eventful 2019 ahead with at least a couple of major films in the pipeline.

Meanwhile, Varun Dhawan has maintained his 100 percent success rate ever since he debuted with Student of the Year. His October may have been an underperformer at Rs 45.50 crore and Sui Dhaaga - Made In India too may not have covered much of a distance with Rs 79 crore coming in. However, with Rs 124.50 crore between the two films and no flop till date, Varun has stayed on to be his reliable self. Same is the case with Ajay Devgn who had just one release, Raid, and that brought in Rs 103 crore. But 2019 should be far more eventful with Double Dhamaal and De De Pyaar De arriving in quick succession.

Another action hero who showed resurgence in 2018 is John Abraham. His labour of love Parmanu - The Pokhran Story (Rs 65 crore) took some time to finally make it to theaters and was critically acclaimed as well as commercially accepted. As a producer and an actor, it was a proud moment indeed for him. On the other hand in hardcore commercial arena, his Satyameva Jayate was a success story as it took an excellent opening despite face-off from Gold and then went on to score Rs 91 crore. The total haul for John Abraham? Rs 156 crore.

Shahid Kapoor at Rs 340 crore scored more than double of that with Padmaavat bringing in Rs 302 crore and Batti Gul Meter Chalu collecting Rs 38 crore. However, while the former rode on the combined power of Sanjay Leela Bhansali, Ranveer Singh and Deepika Padukone being huge contributors, the latter - which was his solo release - turned out to be a commercial flop.

All in all, while 2018 has been a superb year for the youngsters and relative newcomers with the new generation actors not just bringing in exciting content but also winning the hearts of the audiences, the superstar Bollywood Khans who have been reigning for decades have been given a wake-up call.

Of course, the one who is leading from the front in terms of doing maximum movies and ensuring moolah at the box office is Akshay Kumar. However, with Ranveer Singh, Ranbir Kapoor, and Tiger Shroff demonstrating their solid pull and Ayushmann Khurranna, Rajkummar Rao and Kartik Aryan opening up newer avenues for Bollywood to experiment, it is going to be an exciting finish to the current decade.

This Bollywood trade story was written by Joginder Tuteja, a trade expert and film critic, for TV18's moneycontrol.com. It has been reproduced by peepingmoon.com with permission.