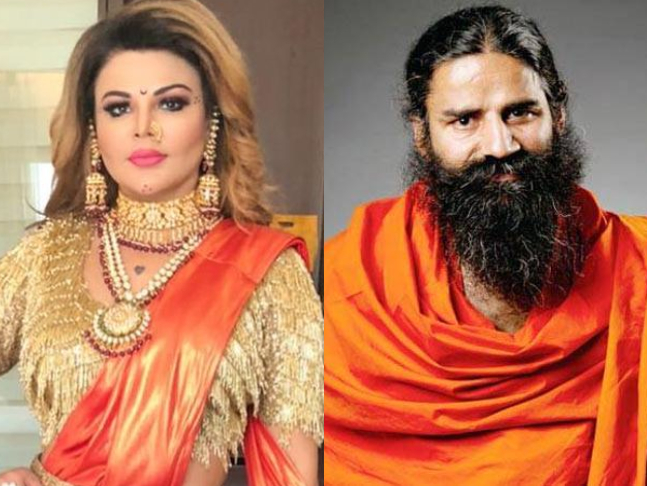 Rakhi Sawant is one celebrity who never fails to entertain. Recently, the actress was spotted by paparazzi in Mumbai and as is her habit she interacted with them and made everyone’s day with her antics and comments. Now, in her latest appearance, the actress compared COVID-19 to Baba Ramdev and gave an explanation for it too.

As the actress was photographed out and about in Mumbai on Tuesday night, she spoke to the paparazzi and said, “My god, ye corona hai na..." and went on to add, "Corona matlab bilkul Baba Ramdev ji ki tarah hai." Before one could ask her more, the actress decided to share why she thinks so. "Kabhi aata hai, kabhi chhup jaata hai, kabhi bahar nikal jaata hai..." she said, leaving everyone in splits. Watch her below:

RECOMMENDED READ: From Rashami Desai to Rakhi Sawant, TV celebs come out in support of Nisha Rawal in her domestic violence case against Karan Mehra

On the other hand, Rakhi is all set to appear on the sets of Indian Idol 12. She will be a special guest on the show and recently took to social media to share BTS pictures and videos from the show. Rakhi promised the episode to be a cracker of a show, leaving her fans excited for more.

In one video, Rakhi was seen twirling and roaming the grounds of an office complex and said, “Hey guys! Main aaj dekho kahaan hoon? Indian Idol ke set par (Look where I am today. I am on the sets of Indian Idol)! So exciting! Wow, it’s so amazing! Itna mazaa aaya Indian Idol ke set par (I had so much fun on the sets) Bohot jald mera episode aane wala hai. Toh kya aap sab log ready hai? Dil thaam kar baith jao, humara episode Indian Idol mein dekhne ke liye. Dhamaka hone wala hai (My episode will be out very soon. Are you all ready? Get set to watch our episode on Indian Idol. It is going to be quite a cracker).”