Raj Kundra's arrest in an alleged pornography case sent shockwaves across the industry. The Mumbai Crime Branch arrested him on July 19 after they found out that he is the 'key conspirator' and mastermind of a racket. While Raj is currently under judicial custody, his arrest proved to be troublesome for Karan Kundrra.

Actor Karan brought to light that an entertainment news portal wrongly used his picture for an article on Raj. The portal used a collage of Karan along with Raj's wife Shilpa Shetty. The actor shared a screenshot and strongly reacted to it. "For f*** sake not that Kundra (sic)," he wrote. 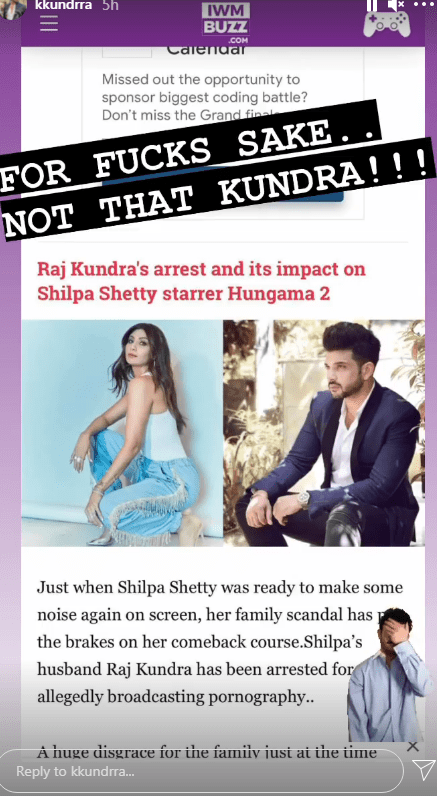 Similarly, Marathi actor Umesh Kamat was dragged into the matter after multiple news agencies wrongly used his pictures and name. Raj's manager, also named Umesh Kamat, was arrested along with the businessman. The Marathi actor issued a statement and clarified that he is not involved in the pornography case.

‘We both wanted to work on the marriage for sure, there is a lot of guilt,’ says Raqesh Bapat about his divorce from ex-wife Ridhi Dogra

Raqesh Bapat talks about his relationship with Shamita Shetty being termed as fake, says 'she is a woman I would want to be with'

Hina Khan remembers moving conversation with Sidharth Shukla after her father passed away, says 'can't really share it with you, but I still go through that chat'