The first-ever season of Bigg Boss OTT is coming to an end tonight. A few weeks later, Salman Khan will be returning to television with Bigg Boss 15. The promos have created much anticipation among fans who are eagerly waiting for their daily dose of drama and entertainment. The premiere date of Bigg Boss 15 is yet to be announced but rumours about contestants are surfacing on social media.

As per rumours, Yeh Rishta Kya Kehlata Hai's Mohsin Khan was one of the participants of Bigg Boss 15. Now, the actor has put all speculations to rest. On his Instagram stories, Mohsin clarified that he is not participating in Bigg Boss 15 as he is too shy for the show. "All the rumours of me doing Bigg Boss are not true. Yaar I’m too shy for it. Wishing everyone all the best and a blessed weekend ahead. Inshaallah," he wrote sharing his picture. 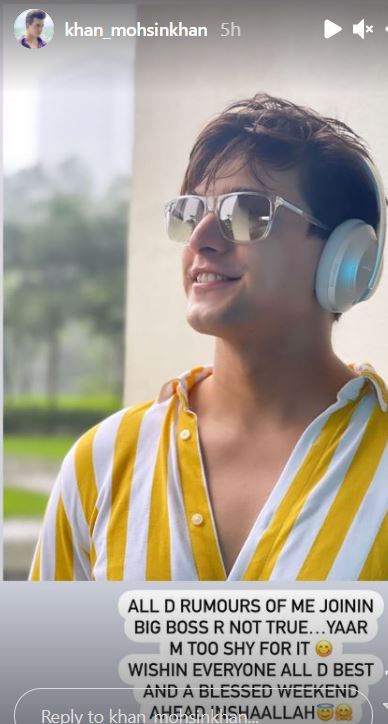 According to reports, Mohsin and his co-star Shivangi Joshi will be bidding adieu to Yeh Rishta Kya Kehlata Hai. Their track will reportedly end in October first week and the actors will shoot for their final episode by the end of this month.