TKSS: Randhir Kapoor reveals he was doing ‘timepass’ with wife Babita but Raj Kapoor made them get married, daughter Karisma brand Kareena and Ranbir as ‘most naughty’ 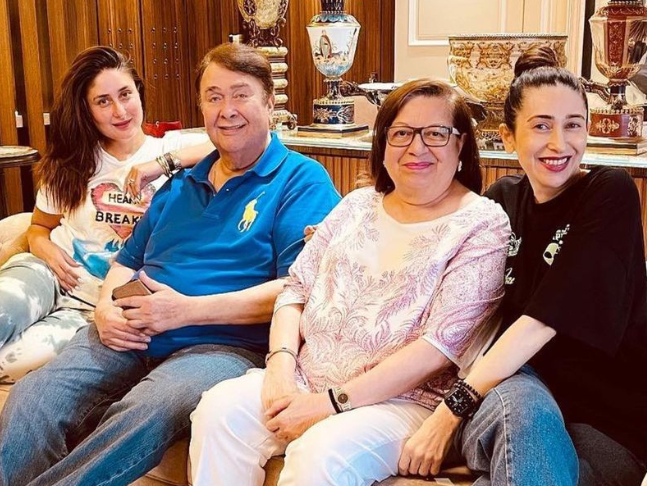 Veteran actor Randhir Kapoor made an appearance on The Kapil Sharma Show with his elder daughter actress Karisma Kapoor on Saturday night’s episode. During the show the father-daughter made several revelations about the Kapoor khandaan as well as Randhir’s wife Babita and how the actor’s parents Raj Kapoor and Krishna Raj Kapoor stepped in and got them married. On the other hand, Karisma reacted on aunt Neetu Kapoor’s jibe that the ‘Kapoors have a fake arrogance’ to them. She reiterated her aunt and said that the Kapoors are ‘strong’ on the outside but ‘sensitive’ on the inside.

RECOMMENDED READ: Arjun Kapoor makes a special request to Alia Bhatt in his birthday wish for Ranbir Kapoor; Kareena Kapoor Khan, Karisma Kapoor and others share sweet messages for him

He further added and revealed whether the Kapoor family knew about the relationship and said, “Main timepass kiye jaa raha tha. He was like, ‘Shaadi vaadi karne ka iraada hai ki nahi?’ (I was whiling away time. My father asked if I had any intention of getting married).” He further said that there was no formal proposal as his parents did so on his behalf and revealed that Raj had asked him, “Jab woh buddhi ho jayegi shaadi karega usse (Will you marry her when she gets old)?”

On the other hand, Karisma was shown a clip by Kapil of previous episode where her aunt Neetu Kapoor branded the family as soft and had said, “Matlab ki andar se lallu hai, upar se rubaab (They have a facade of pride but are fools inside).” Her daughter, Riddhima Kapoor Sahni who had accompanied her on the show had cut in, saying, “She means soft.” Karisma looked surprised at the comment but after watching the entire clip said, “Kapoors are ‘strong’ on the outside but ‘sensitive’ on the inside. We are so honest and sensitive. Everybody has bonded. Touchwood.” She further said that although everyone is busy with their lives they always take time for each other. She said, “But if there is ever a situation, everybody is together.”

On the show, Karisma was also asked to attach some adjectives to her family members. She gave the title of most ‘kanjoos (miserly)’ to Randhir and revealed that when he goes shopping during their family holidays, he returns with just two pairs of socks or two handkerchiefs. However, she said that he never spends any money on himself. Karisma called Ranbir and Kareena extremely naughty and said, “Ranbir and Bebo, same! Peas in a pod.”