Advertisement
HomeBOLLYWOODENTERTAINMENT NEWSArjun Kapoor, Malaika Arora get back to the bay after celebrating her 45th birthday in Italy

Arjun Kapoor, Malaika Arora get back to the bay after celebrating her 45th birthday in Italy 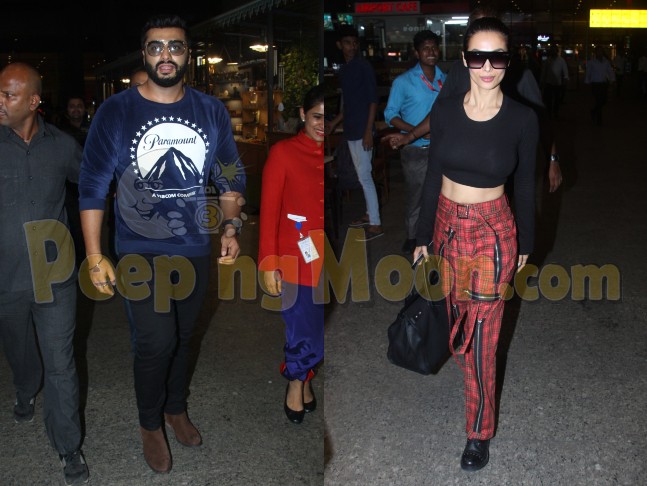 Speculations have been rife for long about Arjun Kapoor's and Malaika Arora's alleged relationship. While the duo has never commented on their status but their recent public appearances have served as enough fodder for gossip columns. In fact, PeepingMoon.com had recently informed you that the Bollywood hottie and TV presenter will be celebrating her 45th birthday with none other her Arjun at Milan in Northern Italy’s Lombardo region.

Now adding fuel to the fire, the rumoured couple was clicked together at the airport as they returned to Mumbai in the wee hours of Wednesday morning, further confirming that they were indeed together on Malaika's birthday. Check out the pictures:

RECOMMENDED READ: Who’s Malaika Arora bringing in her 45th birthday with at Milan?

Meanwhile, it looks like Arjun and Malaika are slowly becoming comfortable in being clicked together in public. Recently, Arjun went on the TV reality show India’s Got Talent that has Malaika as one of its judges to promote Namaste England. He not only sat beside her but also held her hand and shared the stage with her.

Earlier too, Arjun and Malaika created a huge stir in Bollywood by sitting together in the front row for Kunal Rawal's show at Lakme Fashion Week 2018. Subsequently, they arrived together for Sandeep Khosla’s bash.

Now we wonder if the two are all set to take their relationship to the next level yet or not.