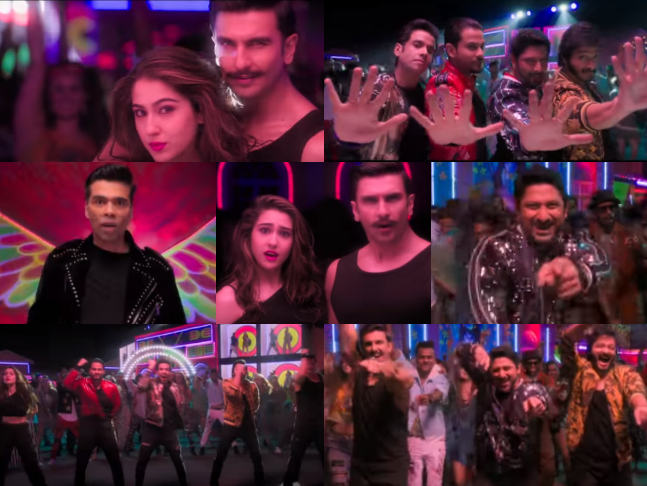 The recreated version is catchy, peppy and Ranveer and Sara impress with their dancing skills and have Rohit Shetty’s trademark style of several background dancers and vehicles to boot. The song has the circus-cum-amusement-park feel but is also full of Easter eggs. Here are five things that we absolutely love about the song.

Karan, who is co-producing Simmba with Rohit makes a cameo appearance at the start of the song. He looks absolutely comfortable making his cameo in the song and starts off with the adage, “Oh no, another remix!” However, let’s be clear on the fact that this recreated version by Tanishk Bagchi is absolutely smashing.

Ranveer and Sara look absolutely smashing in the song. We all know that Ranveer is a 90s kid and is well-known for his love for the films released in that decade but it is Sara who is a revelation. She dances with aplomb and somehow reminds one of Karisma Kapoor in her tomboyish avatar in the song. After seeing her in a traditional avatar in the trailer and songs of Kedarnath she looks impeccably modern in the song and showcases her dancing skills with dexterity.

The song has a Tusshar Kapoor’s version as well incorporated into it. No no, don’t get us wrong, he hasn’t sung but his trademark style of conveying in his mute avatar in the Golmaal franchise is what we are talking about. He is introduced by Shreyas Talpade who usually plays his mouthpiece in the film franchise and dances with him and Kunal Kemmu.

The original actor of the song, Arshad Warsi makes his appearance too when Shreyas introduces the ‘Kumar Sanu version’ and he is seen doing the hook step of the song. Arshad is soon joined by Ranveer and his Golmaal co-stars Shreyas, Tusshar and Kunal. They all dance on the hook step from the original song and we must say it kinda brings nostalgia to us who were in love with the original song Aankh Maare Ladka Aankh Maare.

Oh yeah, the big part, the song Aankh Maarey ends with Tusshar, Arshad, Kunal and Shreyas showing five fingers which hints at the fact that Rohit might be gearing up for the fifth installment of his successful franchise Golmaal.

Aankh Marey has been re-created by Tanishk Bagchi and has been sung by Mika Singh, Neha Kakkar and Kumar Sanu. The lyrics have been penned by Shabbir Ahmed. Simmba releases on December 28, 2018.