Advertisement
HomeBOLLYWOODENTERTAINMENT NEWSWatch: The real spirit of courage was displayed off screen too by Akshay Kumar and his film’s unit when Kesari's set burned down to ashes

Watch: The real spirit of courage was displayed off screen too by Akshay Kumar and his film’s unit when Kesari's set burned down to ashes 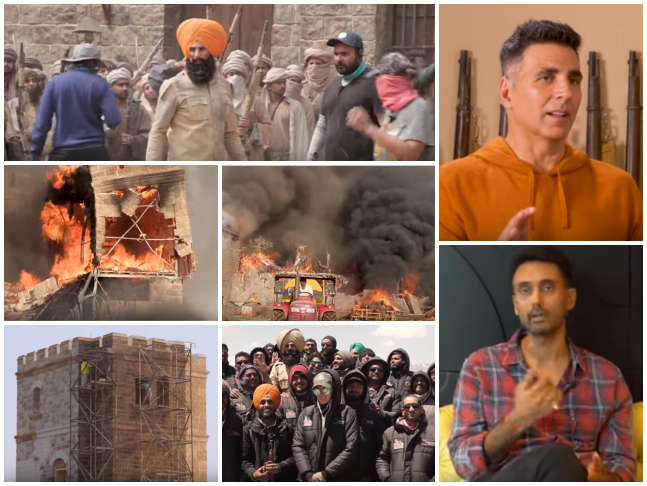 Akshay Kumar’s Kesari is ruling at the box office and has stirred the psyche of the nation by retelling a story of valour that was largely forgotten by the Indians. The film is based on the Battle of Saragarhi and has been directed by Anurag Singh. Parineeti Chopra also stars in the film as the female lead. The film has already become the highest opening weekend earner of 2019. However, the film’s making was not easy as the film’s sets were completely demolished by fire and how everything was burned to ashes.

Akshay shared the behind-the-scenes making video on social media. In the video, he says, “We had almost finished shooting most of the scenes at the Saragarhi and we were gearing up to shoot one of the most important portions of our battle sequence. The camera rolled, there were about seven cameras, but then, within seconds we saw the entire set getting engulfed in fire even before people could react. We didn't realize that there was something which just took off and the entire set literally melted away."

Like the brave men who fought at the historic Battle of Saragarhi the cast and crew of Kesari picked themselves up and made another set on which the filming was completed. In the video, director Anurag said, “We knew that we were just 10-12 days away from finishing our schedule and when the set burned down, I was so upset and so was everybody else, we knew that now it is going to be a little difficult to finish. It was just heartbreaking. I think all of us cried when we saw the set burning down and we couldn't do anything. Next day, Akshay sir comes in, he looks around, takes me aside and says, 'what is done is done, let's plan ahead'. I was like oh wow, this guy is not thinking about the loss.”

Watch the video below:

Watch: The real spirit of courage was displayed off screen too by Akshay Kumar and his film’s unit when the set burned down to ashes