Advertisement
HomeBOLLYWOODENTERTAINMENT NEWSAnanya Panday drops a major hint about her ‘next director’ Farah Khan, will she be starring in the filmmaker’s next film?

Ananya Panday drops a major hint about her ‘next director’ Farah Khan, will she be starring in the filmmaker’s next film?

Ananya Panday might be the newest kid on the block but she sure knows how to keep her fans excited and intrigued. After making a smashing debut in Student of the year 2 the starlet launched her social media initiative Be Positive that saw many applauding her. Now, the trailer of her latest film Pati Patni Aur Woh that released today is already making waves but she has already dropped a major hint about her upcoming project.

Apparently, her next film will be with filmmaker-choreographer Farah Khan as indicated in her latest social media post. Sharing Farah’s post on her Instagram story, the actress wrote, “We love u!! My next director.” The post featured Ananya with her Pati, Patni Aur Woh co-actors Kartik Aaryan and Bhumi Pednekar posing with Farah. Details about the project are still under wraps and an official confirmation is still awaited.

Pati Patni Aur Woes They killed it today n i nearly Killed THEM !! 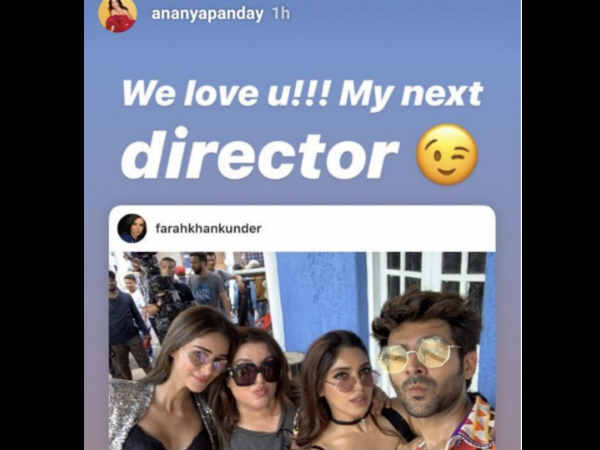 Meanwhile, after Pati, Patni Aur Woh, Ananya will share screen space with Ishaan Khatter in the film Khaali Peeli which commenced earlier in September. The film is being directed by Maqbool Khan and is bankrolled by Ali Abbas Zafar and Zee Studios.

On the other hand, Farah is reportedly working on her upcoming film Seven which is backed by Rohit Shetty and is a remake of the Hollywood musical Seven Brides for Seven Brothers. The film will reportedly feature Hrithik Roshan and Anushka Sharma in the lead but an official confirmation is still awaited on the same. The film is slated to be an ensemble. We wonder whether Ananya will feature as one of the brides in the film.

The guidance of so many creatives geniuses made it unforgettable: Sanjana Sanghi expresses gratitude as her debut film 'Dil Bechara' completes 1 year