Currently gearing up for the release of his upcoming film Malang, Aditya Roy Kapur seems to be in a great career space. For the first time ever, the actor will be seen sharing screen space with Disha Patani, Anil Kapoor and Kunal Kemmu. Fans are already super excited to witness the actor in a never-seen-before avatar in this action thriller. Only recently makers of the film dropped its trailer and received an overwhelming response from the audience. Soon after, two songs have also been released which are already topping the charts.

Meanwhile, leaving no stone unturned in promoting the film, Aditya, on his Instagram handle, shared a hilarious video of him with team Ludo. The unmissable video shows a really funny and quirky side of the actor. It starts with Sanya Malhotra talking about the definitions of happiness in her life and what she enjoys the most. Later, we see director Anurag Basu reciting Aditya's Malang dialogue, "Kuch Nahi Karna Meri Aadat Hai" followed by the actor repeating his epic dialogue while he's sleeping in the bed saying, ''Kuch Nahi Karna Mera Nasha hai''. He captioned the video as, ''Kuch mat Karo, Bas @malangfilm dekho..7 th feb." 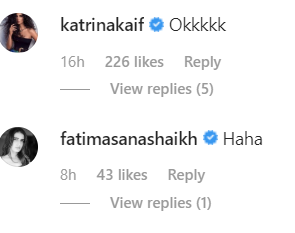 The fun video had responses from several B-town stars including Katrina Kaif and Fatima Sana Shaikh. While Katrina said, "Okkkkk", Fatima wrote, "Haha". Interestingly, back when Aditya made his Instagram debut, he recorded a hysterical video with his Kalank co-star Varun Dhawan. He was seen talking in a funny voice. In the video, he explained how he got to know the importance of Instagram and how he will post every day one post on Instagram.

While he comes across as reticent, once in a while the actor reminds us of his humorous side. Directed by Mohit Suri and written by Aseem Arora, the film is produced by Bhushan Kumar, Krishan Kumar, Luv Ranjan, Ankur Garg and Jay Shewakramani. It hits the screens on February 7, 2020.