Sanjay Dutt and Maanayata Dutt are indeed Bollywood's power couple. Be it adorable PDA or standing like a strong pillar during trying times, they have done it all with a smile on their faces. Now, as Sanjay is taking treatment for lung cancer and will shortly fly to the US, he decided to take some time off to meet his children Shahraan and Iqra. The 10-year-old twins of Sanjay and Maanayata are in Dubai for studies.

Maanayata, who was in Dubai with Shahraan and Iqra during the lockdown, accompanied Sanjay to be with the children. The couple left for Dubai on Tuesday evening. Delighting fans, Maanayata shared a selfie with Sanjay on her Instagram account and wrote, 'Enroute life' and added a few heart emojis. Sanjay, who was sporting a rugged look for his films, was seen in a clean-shaven look amid cancer treatment. 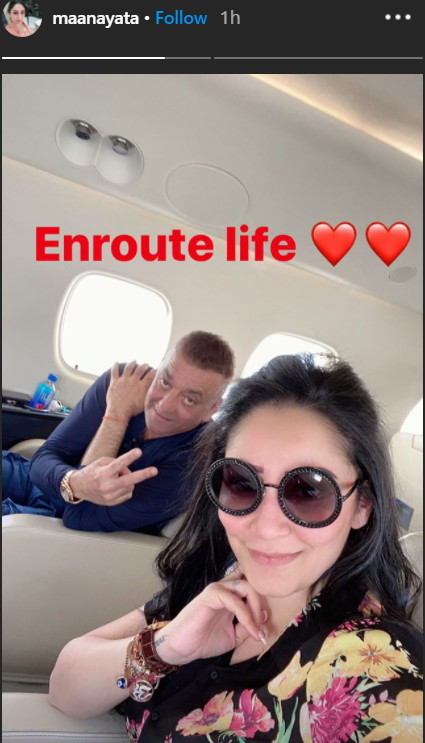 Recommended Read: Sanjay Dutt and wife Maanayata leave for Dubai to be with kids Shahraan and Iqra

Before heading to Dubai, Sanjay finished shooting for his upcoming dacoit drama Shamshera co-starring Ranbir Kapoor. He will reportedly dub for his films including Bhuj: The Pride of India and also complete the shoot of KGF: Chapter 2 before starting his treatment in the US.

As per reports, the actor has secured a five-year visa on medical grounds and will seek treatment at the Memorial Sloan Kettering Cancer Centre in the US, where his mother late Nargis was admitted. Sanjay's daughter Trishala Dutt is a US citizen.