Kangana Ranaut deletes 'take their heads off' tweet about 'Tandav' controversy, later hits back saying 'even I know insects and worms need pesticide'

Soon after, the actress wrote another problematic tweet that she deleted soon after viewers slammed her for violent language. Replying to a tweet about how people have ‘stopped taking insults lying down’ and made the Ministry of Information and Broadcasting seek an explanation from the makers, Kangana wrote on Monday, “Because even Lord Krishna forgave 99 mistakes of Sheshupala.... pehle Shanti phir Kranti (Silence must be followed by revolution).... time to take their heads off... Jai Shri Krishan…” 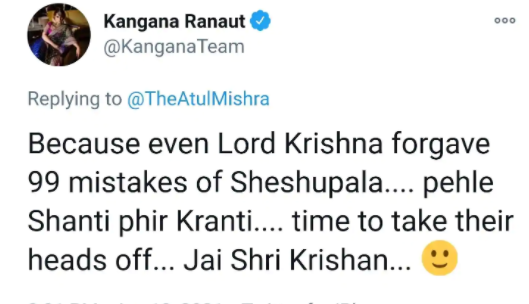 Netizens criticised Kangana for what they perceived as instigation of violence towards the team of Tandav. However, some users defended her as they shared screenshots from Google which said that ‘take head off’ is an idiom that means ‘to scold or berate someone severely’.

Kangana's tweets come at a time when a criminal complaint has been filed before a Delhi court seeking action against OTT platform Amazon Prime and the makers of the web series.