The much awaited Prabhas and Saif Ali Khan starrer Adipurush went on floors today with a test shoot at a studio in Mumbai. However, a Level 2 fire broke out at the film set near Inorbit Mall, Malad in Mumbai. No injuries were reported so far in the massive fire that broke out on the set.

Prabhas and Saif or any other actors were not part of the shoot. The fire brigade officials received a call at 4:30 pm about the fire. The officials said that the fire broke out at 4:15 pm in the studio that was housed in an open plot. Visuals of the fire have come out. 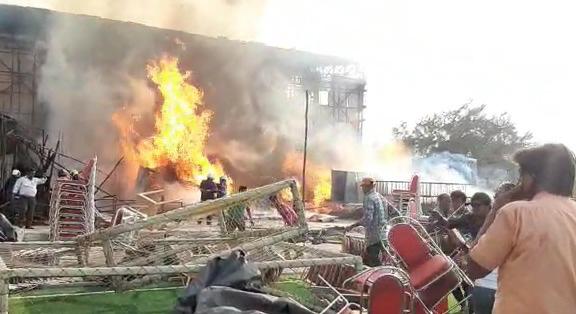 The studio is located in Laxmi Park and all the 100 workers who were inside it have been rescued safely. The film is being directed by Om Raut.

Produced by Prasad Sutar and Bhushan Kumar, Adipurush will be shot in Hindi and Telugu and will release in Tamil, Malayalam, Kannada besides the aforementioned languages. It's slated to hit screens on August 11, 2022.