Advertisement
HomeBOLLYWOODENTERTAINMENT NEWSNot in Maldives: Varun Dhawan takes a sly dig at celebs vacationing in the island nation with his latest Instagram story

Not in Maldives: Varun Dhawan takes a sly dig at celebs vacationing in the island nation with his latest Instagram story

Varun Dhawan has taken a sly dig at celebs flocking to Maldives with his latest Instagram story. The actor, who is always super active on social media, has now poked fun with a video of his breakfast.

Sharing it, he wrote: “Not in Maldives.” The video showed a bowl of cereal. Also seen in the photo is a jug from which milk was being poured. Varun was not visible in the picture. The actor is currently vacationing in Goa with wife Natasha Dalal. A restaurant in Goa named Pousada by the Beach shared a boomerang video in which Varun is greeting their pet dog, named Chai. VD and Natasha were both tagged in the video. 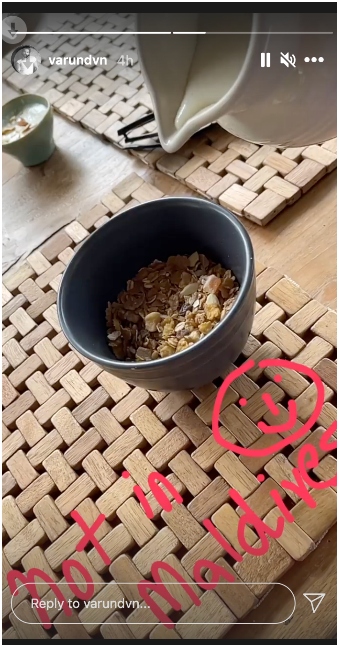 A post shared by Pousada By The Beach (@pousadabythebeachgoa)

In April, a lot of celebrities like Alia Bhatt, Ranbir Kapoor, Disha Patani and Tiger Shroff had visited the Maldives and were posting photos from the island nation when the country was reeling under the worst crisis of COVID-19 second wave. The stars were mercilessly trolled for holidaying while their country was going through the most difficult time. Soon after, The Ministry of Tourism, Maldives, announced the suspension of flights from India.