You and I: Shamita Shetty & Raqesh Bapat make romance Instagram official with a lovey-dovey photo from their first dinner date

In the Bigg Boss OTT house, Shamita Shetty and Raqesh Bapat's relationship was much talked about and the most adored. The two seemed to enjoy each other's company. After Shamita chose Raqesh as her show's connection, the two created quite an impression on the audience with their fights, debates, sweet moments.

Now, Raqesh and Shamita appear to have taken their romance to the next level by going on their first romantic dinner date. Not only this, but the couple also sort of made their relationship Instagram official by posting a romantic photo. Sharing a photo of just their holding hands, Raqesh wrote, “U & I,” followed by red heart emoji. He also mentioned their famous hashtag “#shara”. Shamita too shared this image on her Instagram Stories, with big red heart emoji. 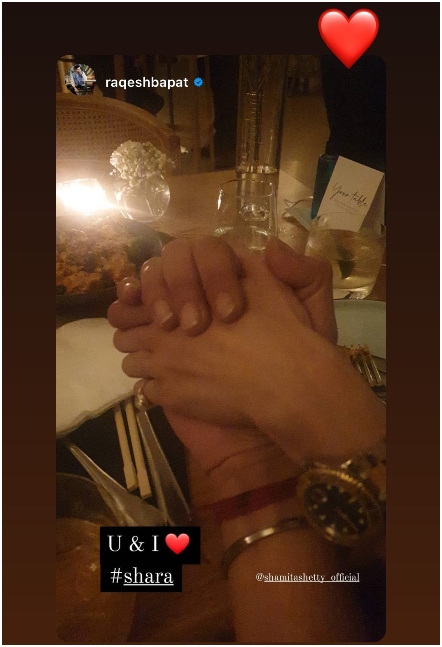 Recommended Read: Raqesh Bapat talks about his relationship with Shamita Shetty being termed as fake, says 'she is a woman I would want to be with'

The couple was snapped by the paparazzi as they arrived for their first official date post-BB OTT. Shamita looked gorgeous in a peach co-ord set while Raqesh complemented her look in a black shirt and denim.

'Shara' fans could not contain their excitement after pictures of the two went viral on social media.