Advertisement
HomeBOLLYWOODENTERTAINMENT NEWSNo truth to these rumours, am not a part of Bigg Boss 15: Rhea Chakraborty shuts down rumours of her participation in Salman Khan’s show

No truth to these rumours, am not a part of Bigg Boss 15: Rhea Chakraborty shuts down rumours of her participation in Salman Khan’s show 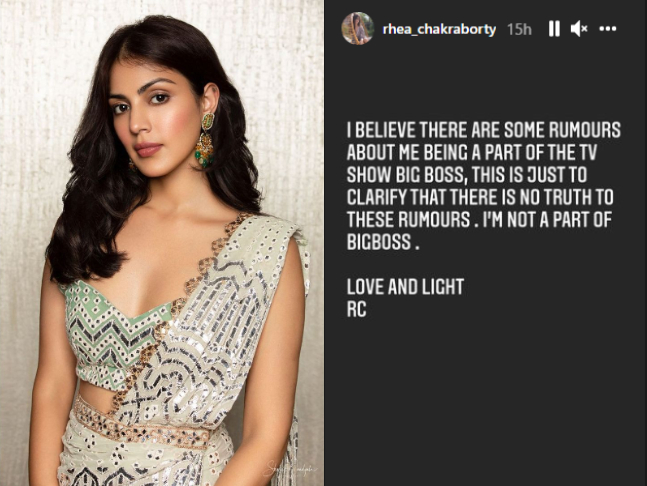 Rhea Chakraborty took to her social media to shut down rumours of her being a part of Salman Khan’s controversial reality show Bigg Boss 15. The news of her participating had started doing the rounds months back and it was reported that she was offered a whopping Rs 35 lakh per week for the show.

Taking to her Instagram stories, Rhea quashed all speculations and wrote, “I believe there are rumours about me being a part of the TV show Bigg Boss, this is just to clarify that there is no truth to these rumours. I am not a part of Bigg Boss (sic).” There were also rumours that along with Rhea, Sushant Singh Rajput’s ex-girlfriend Anita Lokhande will also be a part of the show. However, Ankita denied such reports in a social media post as well.

Rumours of Rhea entering BB 15 started doing the rounds when the actress was spotted visiting the same studio as Tejasswi Prakash, who had already been announced as one of the housemates. Former Bigg Boss contestant, Dalljiet Kaur, was also spotted at the studio on the same day. The 15th season of the popular reality show premiered on October 2 on Colors TV.