The Indian Motion Pictures Producers Association (IMPPA) has written a letter to Indian Finance Minister Nirmala Sitharaman, requesting her to abolish the Goods and Services Tax (GST) levied on the film industry as a one-time measure in the wake of the coronavirus pandemic.

The letter has been signed by IMPPA President TP Aggarwal and reads, “Requesting you to kindly consider the pain and agony the Film Industry is going through due to extreme taxation and also GST being levied at 18% which is at a very high rate because this is an industry where Government makes no investment at all but takes away the lion’s share in the income generated and therefore in such an industry where the entire capital is being contributed by the entrepreneurs and today at a stage where the industry has reached a dead end due to the pandemic it has become very important and necessary that new blood & strength be pumped into the industry by way of abolishing GST and all other taxes as a onetime measure to revive the industry.” 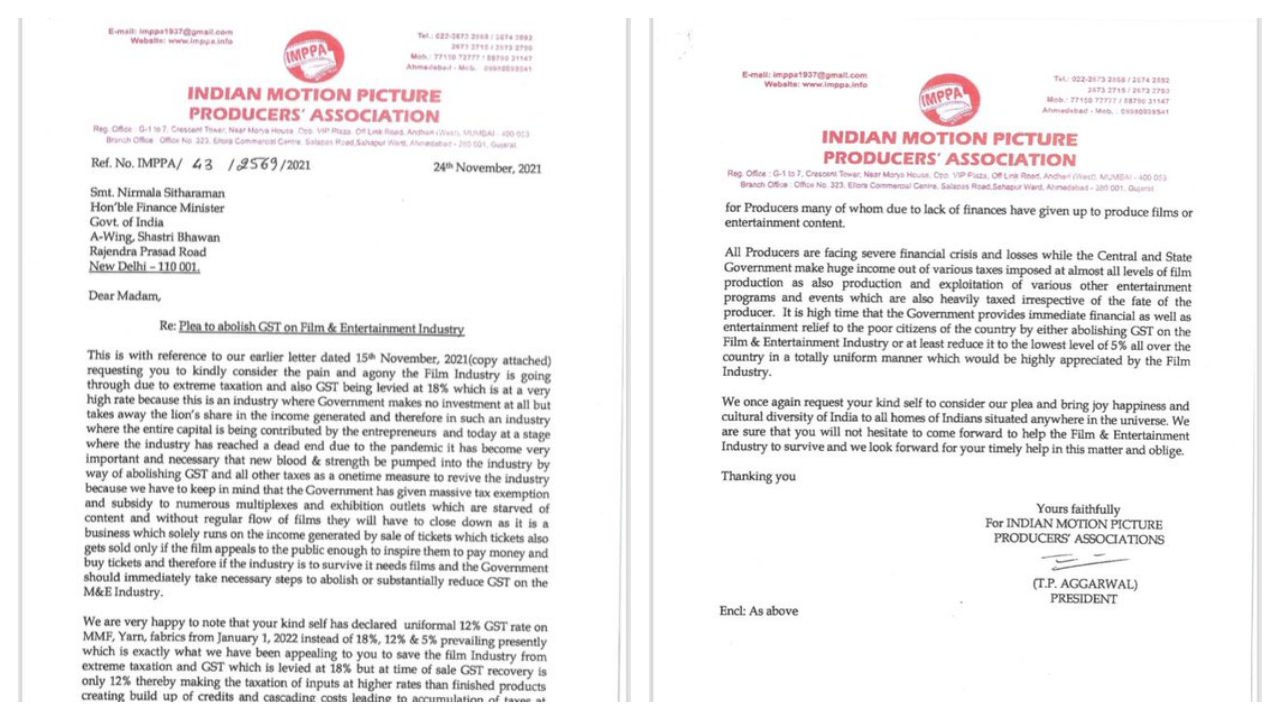 RECOMMENDED READ: ‘Atrangi Re’ deal was signed for OTT, despite theatres opening the filmmakers said they would not backtrack

The letter invoked a request wherein the Government was asked to immediately take necessary steps to abolish or considerably reduce GST on the M&E industry so that it can flourish, since its sole income is from the sale of tickets and due to the lockdown the industry has incurred heavy losses. The letter also noted that similar tax exemptions and reductions have been given by the government to other industries like MMF, yarn, fabrics and others and asked for the same leeway.

The letter highlighted the agony and financial crunch faced by the producers and stated, “All Producers are facing severe financial crisis and losses while the Central and State Government make huge income out of various taxes imposed at almost all levels of film production as also production and exploitation of various other entertainment programs and events which are also heavily taxed irrespective of the fate of the producer. It is high time that the Government provides immediate financial as well as entertainment relief to the poor citizens of the country by either abolishing GST on the Film & Entertainment Industry or at least reduce it to the lowest level of 5% all over the country in a totally uniform manner which would be highly appreciated by the Film Industry. We once again request your kind self to consider our plea and bring joy happiness and cultural diversity of India to all homes of Indians situated anywhere in the universe. We are sure that you will not hesitate to come forward to help the Film & Entertainment Industry to survive and we look forward for your timely help in this matter and oblige.”

Vicky Kaushal and Katrina Kaif clicked as they arrive in Jaipur for their wedding, take cars to the venue instead of chopper

Vicky Kaushal-Katrina Kaif wedding: Marriage venue Six Sense Barwara lights up for the couple’s arrival ahead of their nuptials

Salman Khan confirms Dabangg 4 to be in the scripting stage, will share official announcement soon

Vicky Kaushal-Katrina Kaif wedding: Is Salman Khan’s bodyguard Shera and his team providing extra security to the betrothed couple for their nuptials?