Sara Ali Khan’s and Parineeti Chopra’s videos have lit up the internet today. Sara shared a video from Delhi wherein she can be seen enjoying a qawwali at a dargah whereas Parineeti shared a video after receiving a surprise from the cast and crew of her upcoming film Uunchai for completing ten years in Bollywood. She cut the cake with co-star Amitabh Bachchan. Read details below: 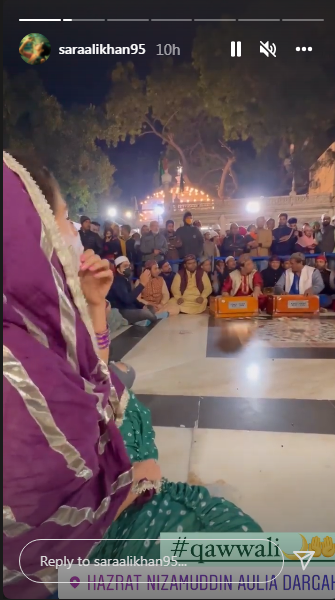 Sara, who is busy promoting her upcoming film Atrangi Re, took to Instagram stories to share videos of herself enjoying qawwali at Nizamuddin Dargah in Delhi. In the videos, she can be seen enjoying the performance of the singers on Kun Faya Kun. In the video, Sara is seen decked up in a dark green and purple sharara with a face mask with her Atrangi Re character’s name ‘Rinku’ embroidered on it, In another video posted by her she wrote, “Jumma Mubarak. Rinku reaches Hazrat Nizamuddin Aulia Dargah.” Besides Sara, Atrangi Re also stars Dhanush and Akshay Kumar and is directed by Aanand L Rai. 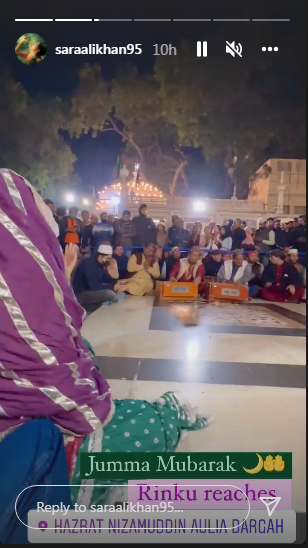 Parineeti clocked ten years in Bollywood on Thursday and the actress shared a video from the sets of Uunchai, where the cast and crew gave her a beautiful surprise. Sharing a video from the Mehboob Studio in Mumbai, Parineeti wrote, “The best surprise ever! Thank you to the entire team of Uunchai and Team Parineeti for making yesterday incredible. To celebrate with and learn from such massive legends, I must have done something right. 10 years and I’m just about starting. Special love for my A-team/family without whom I am nothing! It truly takes a village! Neha, Ajayji, Micheal, Manju, Govind, Sanjay and the massive team at YRF - You make this crazy, hectic life better! Needless to say, I am nothing without my FANS. Thank you for making me a part of your lives."

In the video, Parineeti can be seen entering the studio which has been decorated with silver coloured balloons that reads, “10 years of Parineeti Chopra.” The actress’ milestone celebration was also attended by her Uunchai co-stars Amitabh Bachchan, Anupam Kher and Boman Irani. However, it was Arjun Kapoor’s comment that stole the show. The actor who made his Bollywood debut in Ishaqzaade opposite Parineeti wrote, “Umar ho gayi (You have aged). veteran now.”