Shah Rukh Khan has reportedly wrapped the shoot of Siddharth Anand's actioner Pathaan. The film produced by Yash Raj Films also stars Deepika Padukone and John Abraham in the lead. The actor was recently in Spain for the shoot and on-set viral pictures took social media by storm. Now, the superstar has once again won hearts.

Shah Rukh sent across a handwritten note to a crew member who worked with him on Pathaan. The person named Abhishek Anil Tiwari shared the note on his Instagram stories and it has now gone viral. "To Abhishek, Thank you for making Pathaan. Such a wonderful experience for all of us, especially me. You are a gem my man. The hard work, efficiency, and smiles with which you pulled off such difficult work is much appreciated. Also I love the fact that you love your drinks man. Have a good life in cinema- will miss u lots," Shah Rukh wrote. 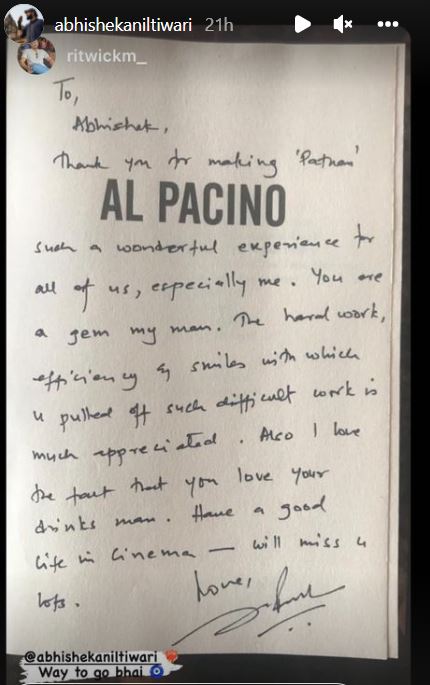 Recommended Read: Shah Rukh Khan spotted shooting in the city; is it for Atlee's upcoming action-thriller?

It appears that Shah Rukh has resumed the shoot of his film with Atlee. The yet-to-be-announced film also stars Nayanthara and Sanya Malhotra.