It is a great moment for any parent when their children achieve something and they get introduced by their offspring’s name; same is the case situation with R Madhavan who is basking in the glory of being the father of Vedaant Madhavan, India’s swimming champ who won a gold medal in swimming at the Danish Open 2022 in Copenhagen after clinching a silver medal previously. Several Bollywood celebs including Priyanka Chopra Jonas and Kangana Ranaut lauded Vedaant’s achievement and sent good wishes to Madhavan.

Madhavan on Monday revealed that Vedaant won the medal in the 800m swimming championship and finished in 8:17.28 minutes. The proud father shared a clip of his 16-year-old son from the tournament. Kangana, who shared screen space with Madhavan in Tanu Weds Manu and Tanu Weds Manu Returns shared a still of Vedaant wearing his gold medal, calling him “champion” while Priyanka said ‘amazing feat’. 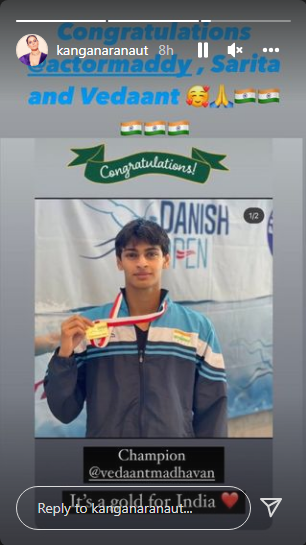 These young boys Sajan and Vedaant have made us all proud. Am sure it’s an amazing feeling as a parent, @ActorMadhavan. Heartiest Congratulations https://t.co/o9IsNW5ZJ8

Heartiest Congratulations to Indian swimmer Vedaant Madhavan for bagging his 2nd medal at the Danish Open 2022 & also for winning a Gold in 800 Freestyle clocking 8:17.28s.@ActorMadhavan special badhai to the proud parents .
pic.twitter.com/3bssaT9uNi

On the other hand, Vedaant has been trending on Twitter and the netizens took to the social media platform and gave a shoutout to Madhavan’s upcoming directorial debut Rocketry: The Nambi Effect stating, “Looking forward to this upcoming film of Vedaant Madhavan's father.”

Previously, Madhavan in December 2021 had announced that he and his wife Sarita are moving to Dubai to help their son prepare for the upcoming Olympics. He had said, “The larger swimming pools in Mumbai are either closed because of Covid or out of bounds. We are here with Vedaant in Dubai where he has access to large pools. He’s working towards the Olympics, and Sarita (his wife) and I are right by his side.”