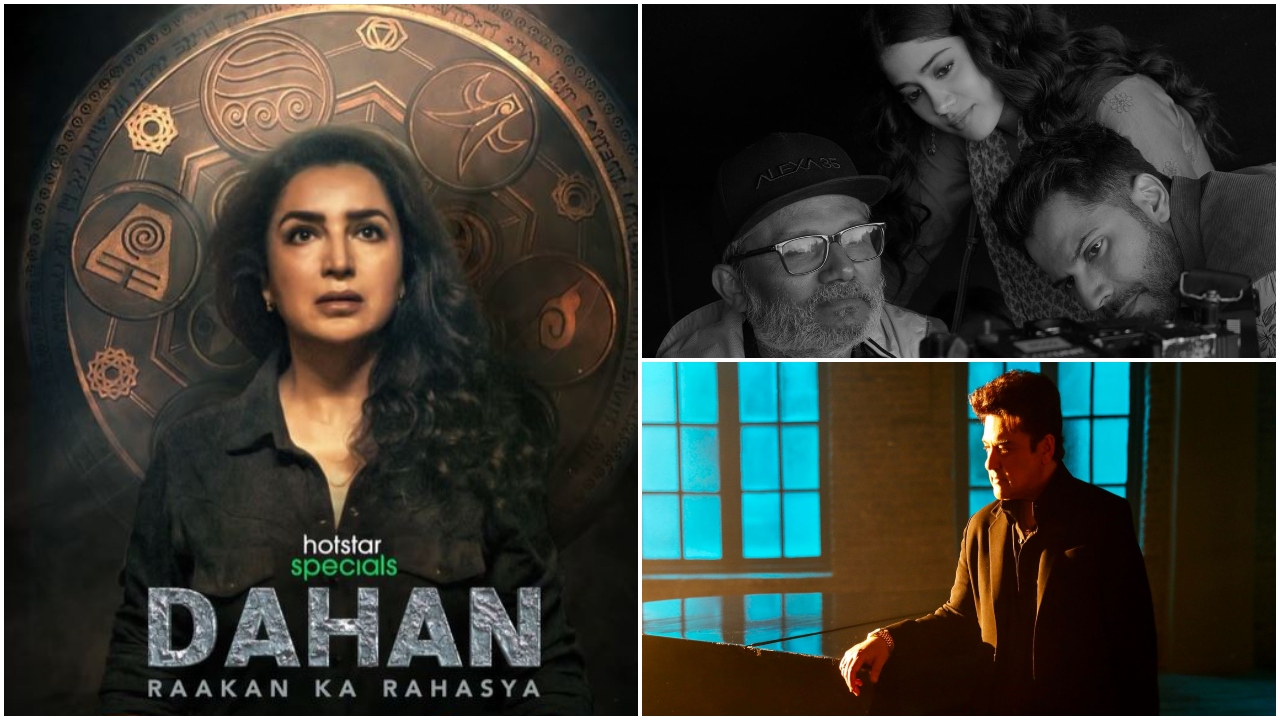 It was yet another interesting day for the tinsel town. As the week is about to wrap, Bollywood celebrities gave their fans some exciting surprises that came in form of songs, new project announcements and film wraps. Here's a look at what happened throughout the day:

First look of Saurabh Shukla and Tisca Chopra’s Dahan out

When it is Saurabh Shukla and Tisca Chopra, you are assured that nothing can go wrong. Similarly, the motion poster of their upcoming Hotstar Specials Dahan became the talk of the town. The first look of the project was truly interesting.

Speaking of the look, we can see Tisca gazing intently at something in the distance while something anonymous thing caught Saurabh’s attention. In the backdrop, one can notice a round rotating disc with different symbolic engravings on it.

Abhishek Bachchan to hoist the Indian flag at IIFM

Making India proud on Australian soil, actor Abhishek Bachchan and former Indian captain Kapil Dev will hoist the Indian tricolour at the Indian Film Festival of Melbourne(IFFM). The act is to mark the 75th Independence day and what better way to see the Indian flag waving high on foreign soil?

Abhishek, who will be there at IFFM as one of the key guests, said, "It gives me great honour to be a part of the 75th year celebrations of Indian Independence in Melbourne. It’s a matter of pride for me to hoist the Indian National Flag in the iconic Federation Square. It’s an event where Indians from all across Australia, from all different backgrounds, will come together to celebrate India at 75. This is a mark of the friendship between Australia and India. To share this platform with Kapil Sir is momentous for me and the event is also a mark of the coming together of Cinema and Cricket, two things that have often united us Indians together. Looking forward to celebrating India, Indians and the spirit of our country amongst hundreds of people who will be in attendance to celebrate this landmark moment and event."

The Dasvi actor, who is looking forward to interacting with his fans in Melbourne, has a big fan base in Australia. Mitu Bhowmik Lange confirmed it. “India is completing 75 years of independence and this event is a mark to celebrate this landmark moment. We are ecstatic to have Kapil Dev and Abhishek Bachchan jointly come together this year to do the honors of hoisting the Indian tricolour. It’s a mark of the friendship that our country celebrates with Australia and with these two icons coming together is the perfect amalgamation of cinema and cricket.” she said.

IFFM will be taking place, physically and virtually, from August 12 to 20. After the pandemic, this is the first time it has come with its physical event since 2020 and 2021 were done virtually. It is one of the biggest Indian film festivals that take place outside of India and is also the only Indian film festival backed by the Australian government. The film festival will showcase more than 100 critically acclaimed movies. The festival will also be opened with the film, Taapsee Pannu’s Dobaaraa which has been directed by Anurag Kashyap.

There has been lots of speculation going around about the ace music composer & singer Adnan Sami. It was only recently that Sami deleted all his posts on Instagram and posted a video titled Alvida that had broken the internet and kept the nation guessing what the musician was trying to convey. Finally, the Padma Shri singer has put rumours to rest and has now dropped his track titled, Alvida! Incidentally, this is Adnan's first song after a long gap of 2 years and the peppy track surely will put his fans at ease. Alvida is a vibrant track which will have you grooving in no time, with catchy lyrics and Adnan's signature hand gestures.

Alvida is a song which grabs your attention and is characterised by that classic Adnan Sami feels that we are sure was missing for quite some time now. The song is a visual treat and instantly strikes a chord with you with Adnan himself acting in it alongside the beautiful, Sarah Khatri.

Sharing his joy Adnan shared, “I have been receiving tons of messages about the speculation around Alvida and I'm really elated with the amount of love and affection I have received. This song is for all my fans and the audiences who have bestowed their support & endless love over the years. Alvida is my own way of saying goodbye to my old self and welcoming ‘Adnan 2.0’ with open arms. This song is special and I have been working on it for a while. The aim was to serenade the world with a melodious foot-tapping track with soulful lyrics."

Speaking on the collaboration with a musical maestro like Adnan, Vikram Mehra Managing Director of Saregama India said, "The only thing better than his music is the man himself. We are delighted and honoured to partner with the Sultan of Music Adnan Sami for his latest song Alvida.” The lyrics of the song are by Kausar Munir and the video has been directed by Ritika Bajaj.

With every day passing by, Sajid Nadiadwala’s Bawaal is smoothly wrapping up different parts and segments of the film. Starring Varun Dhawan and Janhvi Kapoor in lead, Nitesh Tiwari’s directorial is currently on floors in Warsaw, Poland. As the film enters the next schedule, Janhvi has summed up her journey on the sets of Bawaal. With an emotional heart, the actress penned a beautiful note on social media.

She wrote, "From stalking Nitesh sir and Sajid sir to make sure i get this film, to praying obsessively that it happens, to pinching myself everyday that I’m actually shooting for it, to having finally wrapped it. I still can’t believe that I’ve been lucky enough to be a part of this wholesome, heartfelt world that Nitesh sir has created. I’ve learnt so much from you sir, so much about films and making movies with love but more about the value in being a person that leads their life with such dignity and honest values. And Varun, I can say thank you for always looking out for me and all those generic things that hold true but what I really want to say is that although we disagree and annoy each other more often than not, Nisha will always be on Ajjus team and always root for u and also find restaurants that have salmon tartare or grilled chicken for u. I can write an essay on everyone in our team who’s made this film so special for me but I think there’s a word limit… but basically I’ll miss you all and thank you for making the last three months feel like magic and now.. back to reality! #Bawaal”

Bawaal is produced by Sajid Nadiadwala, under the banner of Nadiadwala Grandson and is co-produced by EarthSky Pictures. The film is directed by Nitesh Tiwari and will hit screens on April 7, 2023.