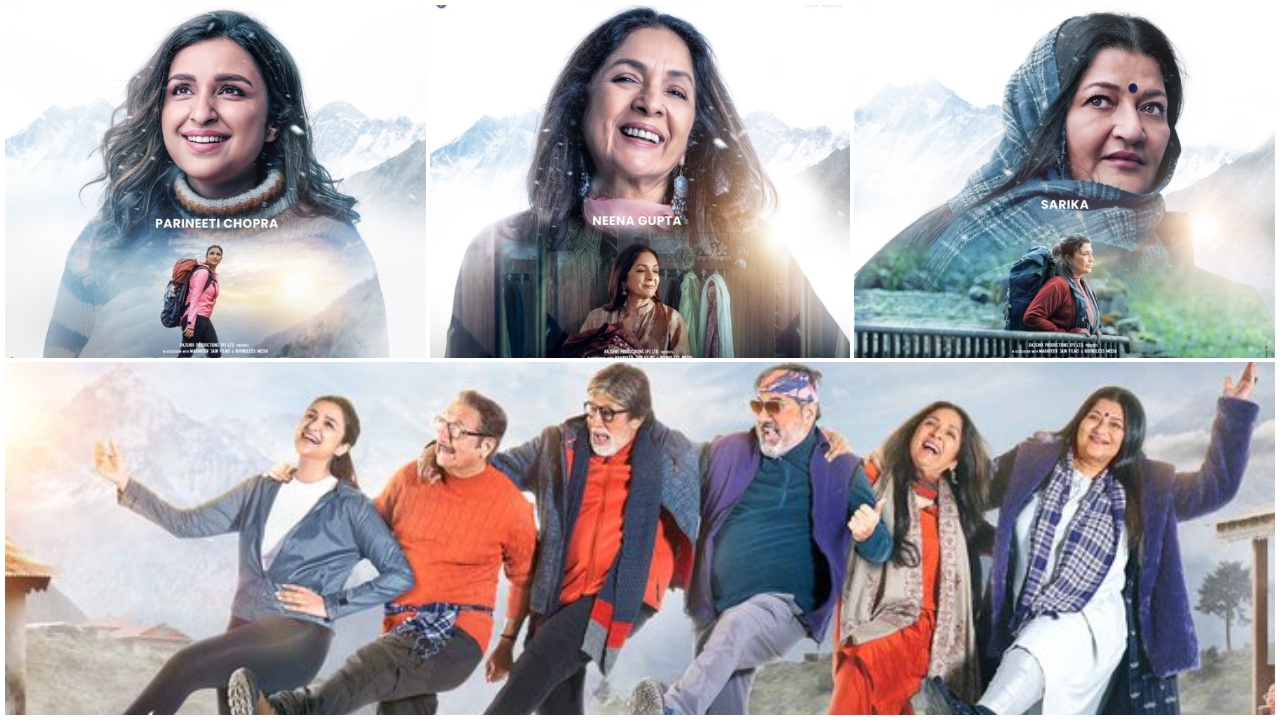 Taking to social media, Arjun wrote a heartfelt message for Parineeti which read, “She was my first co-star, she was my first heroine and this is her first #Rajshri film. This is to all the beautiful firsts. This one is for you Pari! With all heart, I bring to you, my dear friend Parineeti as Shraddha Gupta from #Uunchai!”

Parineeti’s Uunchai look, like all the other posters are divided into two glimpses. It is said that she plays Shraddha Gupta, a trek guide in the film; the same can be seen in the first glimpse of the poster. Determination in her eyes and confidence in her walk, she looks like a woman always on move! In the second glimpse from the character poster, one can see a happy Parineeti, looking up and smiling with immense happiness, with a hint of blush. Parineeti’s tagline reads – Liberation Was Her Only Motivation. It will be interesting to see this young star in her right, share screen with the most veteran star cast of 2022.

Gajraj Rao took to his social media handles to share Neena’s character poster from Uunchai with her exclusive first look! Neena plays Boman Irani’s wife in the film and is introduced as Shabina from Uunchai. Her character poster stands out from the rest of the character posters released by the makers, as this is the first one where the character is not seen in snow gear. Neena’s poster is here remind the audience of a quintessential Rajshri film feel. Her poster is divided in two halves, where one half shows her near a wardrobe full of everyday clothes, she seems to be in middle of household chores. The other half shows a carefree smile with a mild twinkle in her eyes, as her character celebrates the constitution of family with her exclusive tagline – Family Was Her Only Motivation.

Sarika’s poster was introduced by Kirron Kher. Kirron took to her social media handles to introduce to the world, another talented star, co-actor and friend, Sarika! Uunchai marks Sarika’s second collaboration with Rajshri. She worked with the iconic production house in the hit film Geet Gaata Chal in 1975. Uunchai is her homecoming. There are whispers in the industry that Sarika’s performance is power packed in Uunchai and this may mark a very strong comeback for her. Talking of her performance, two still frames that compose her first look poster speak for themselves. On one hand, she stands with her backpack, taking a pause on a trek trail. On the other hand, we see her amidst the snow mountains, head covered with a scarf, and her beautiful, hazel-grey eyes look on in search for something almost spiritual. Noteworthy difference also is a different take on the tagline for this poster. It reads – Redemption Was Her Only Motivation.

Another poster of the entire star cast was revealed today ahead of the trailer launch tomorrow on October 18. The stars shared the poster with the caption, “Proud to be a part of this special ensemble! Here we come. Trailer Out Tomorrow! Make way for #Uunchai on 11.11.22 #75YearsOfRajshri.”

Trailer Out Tomorrow!
Make way for #Uunchai on 11.11.22
#75YearsOfRajshri pic.twitter.com/D4sYvSUmzA

Directed by Sooraj R. Barjatya, produced by his home production Rajshri Productions in association with Mahaveer Jain Films and Boundless Media, Uunchai will be in theatres on November 11, 2022. The trailer will release tomorrow on October 18, 2022.