I apologize and not my intention: Richa Chadha issues an apology for her ‘Galwan says hi’ tweet mocking and insulting the Indian Army 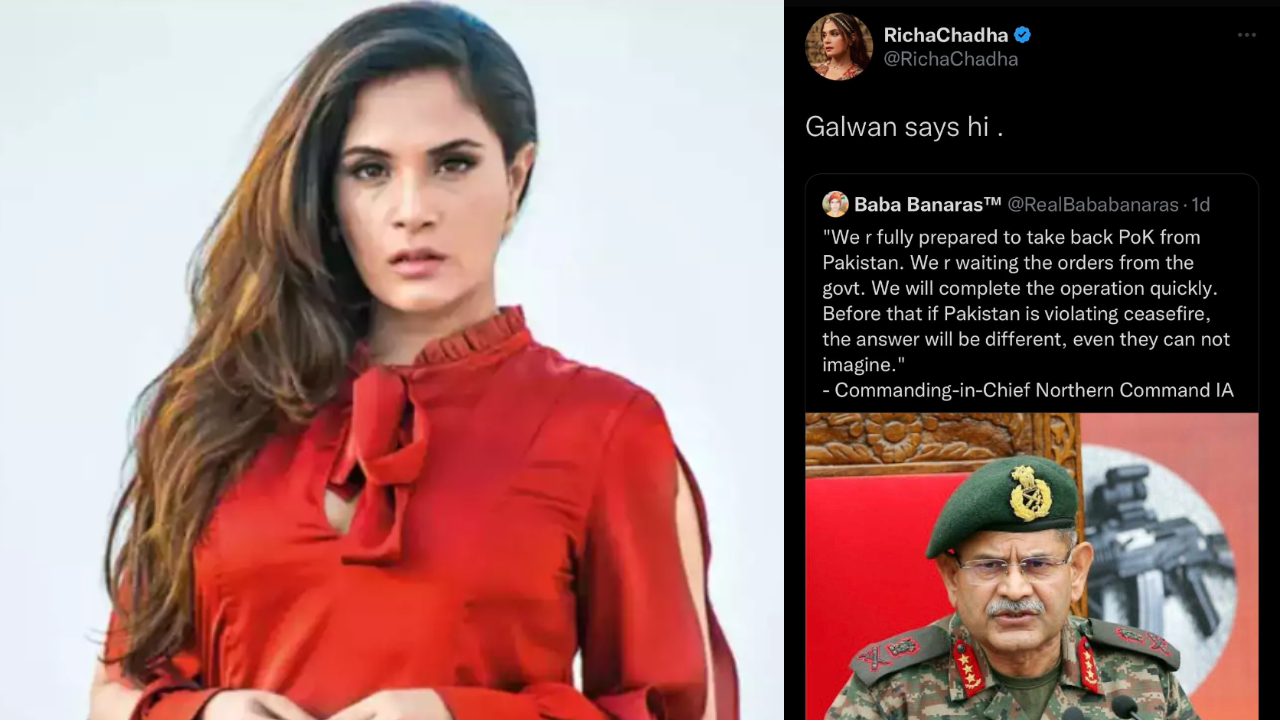 Richa Chadha, whose tweet on Galwan sparked a huge debate on Twitter with netizens slamming the actress left, right and centre, has finally issued an apology for her controversial tweet. Richa said that her intention was not to hurt anyone and has apologized for her words, even if unintentionally it triggered this feeling. Richa was trolled for her supposedly scathing tweet while reacting to a statement of Lt.General Upendra Dwivedi that the Indian Army is ready to execute orders like taking back Pakistan-occupied Kashmir. Richa had reacted to the news with the words, “Galwan says hi,” which people claimed insulted and mocked the India Army.

Richa’s tweet was deemed as insulting and a mockery of the Indian Army and belittling the sacrifice of the Indian soldiers in the 2020 Galwan valley clash between India and China. Following her tweet, several leaders and social media users demanded an apology from her and even cried out for boycotting Bollywood. Some even asked an FIR to be lodged against her for her. Now, Richa has apologized for her tweet and released a statement that reads, “Even though it can never be my intention in the least, if the 3 words which are being dragged into a controversy have offended or hurt anyone, I apologise and also say that it would sadden me if even unintentionally my words have triggered this feeling in my brothers in the fauj (army) of which my own Nanaji has been an illustrious part.”

RECOMMENDED READ: Richa Chadha gets a tattoo of husband Ali Fazal's name, surprises him during their wedding festivities

She further stated that her grandfather, a “Lieutenant Colonel” in the Indian Army took a bullet in the leg in the Indo-China war and her “mamaji was a paratropper. It’s in my blood. . A whole family is affected when a son is martyred or even injured while saving the nation which is made up of people like us and I personally know how it feels. It is an emotive issue for me.”

Richa’s tweet had made a Supreme Court lawyer, Vineet Jindal demand her arrest. He apparently wrote to the Delhi Police Commissioner and demanded to lodge an FIR against her. Several netizens have slammed the actress calling a boycott on her upcoming release Fukrey 3 for her controversial tweet and political leaders have demanded her arrest.

Check out some tweets by netizens below:

"Galwan says hi" writes Richa Chadha in response to a statement by a commanding officer on POK. Disrespecting those who gave their lives for India. Mocking the Indian army. She proves once again there is no limit to how low this industry can sink. A boycott is all they are worth.

#RichaChadha's head is full of something else, not brain

She confirms once again there is no limit to how low this industry can drop. A boycott is all they are worth!
#RichaChadha pic.twitter.com/oUv6MrgGiC