Shah Rukh Khan seems to be focusing on his production company Red Chillies Entertainment with all guns blazing! The superstar might not have announced his next acting venture since the debacle of Anand L Rai's Zero in 2018 but has greenlighted multiple projects as a producer for the next year. His banner is believed to have been developing half a dozen projects — including films as well as web shows— and one of them, we heard, is with Kartik Aaryan.

Peepingmoon.com has learned that Red Chillies Entertainment is in talks with Kartik Aaryan for a romantic-comedy. BA Pass and Section 375 director Ajay Bahl is said to be helming this yet-untitled project. "The script of the film is locked and the makers are planning to roll it around mid-next year. Kartik has shown his interest and is currently discussing his dates before he commits to the film. However, the talks so far have been positive and it's just a matter of fact Kartik signs on the dotted line," said a source close to the development. 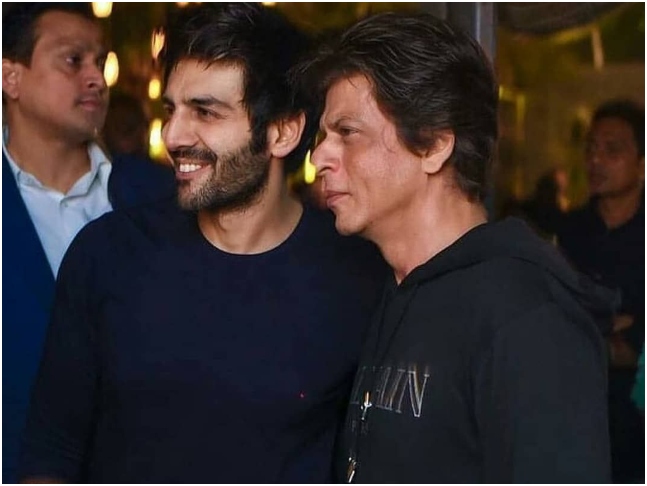 Kartik will apparently complete his prior commitments before shooting for this SRK production. The young star returns to sets next month with Ram Madhvani's untitled taut thriller adapted from the South Korean film, The Terror Live. He will then wrap up the remaining portions of Anees Bazmee's Bhool Bhulaiyya 2 in January and Karan Johar's Dostana 2 in March next year. Kartik is reportedly also doing the remake of Allu Arjun blockbuster Ala Vaikunthapurramuloo under Rohit Dhawan's direction.

SRK is lately betting more on young talents and his film with Kartik will be the third 2021 Red Chillies project that will have a Gen-Y Bollywood actor headlining it. Khan has already signed Arjun Kapoor for a crime-thriller based on the Muzzafarpur shelter home case and recently announced Love Hostel starring Vikrant Massey, Bobby Deol and Sanya Malhotra. He is also producing Kahaani spin-off, Bob Biswas that has Abhishek Bachchan in the titular role alongside Chitrangda Singh.