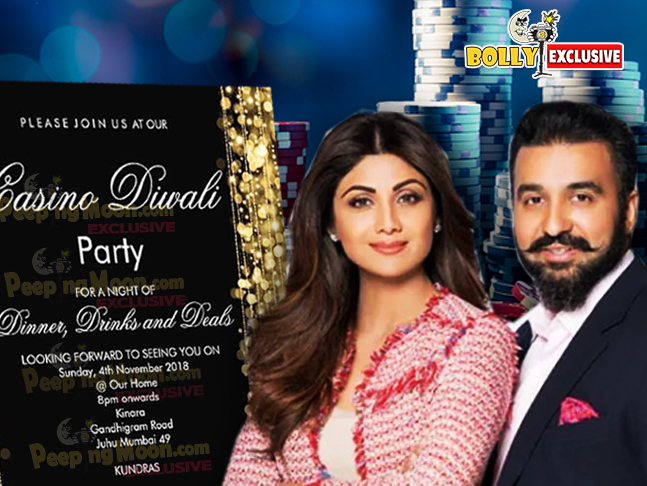 Last night, PeepingMoon.com kick-started your festive season by announcing the first Diwali party of 2018 – the big one at Mannat on November 3, for which Shah Rukh and Gauri Khan have started sending out “Save the Date” notifications to all of Bollywood. Well, not all but those they are close to and working with. That Saturday it’s going to be a triple celebration. The party will be for Diwali and also for SRK’s birthday the previous day (November 2) and the trailer launch of his next film Zero that’s slated to also happen on Friday, November 2.

Diwali invite from the Kundras![/caption]

Now PeepingMoon.com brings you the juicy tidbit of the other big Diwali party in Juhu that all of Bollywood looks forward to. This one is the grand ‘Casino Diwali’ celebration for which Shilpa Shetty and Raj Kundra have begun sending out “Save the Date” messages on Whatsapp. It’s to happen on Sunday, November 4, at their residence Kinara on Juhu Beach. “Please join us for Dinner, Drinks and Deals,” says the message sent by the Kundras. Which means, the festive fever that will set in on Saturday night at the Khans’s Diwali party at Mannat won’t have a chance to die down. It will continue on Sunday at the Kundras’s Diwali bash at Kinara. All of Bollywood will have to be on Red Bull!

Raj and Shilpa photographed in Mumbai.[/caption]

The ‘Casino Diwali’ party held by the Kundras is without exaggeration one of the most star-studded events of Bollywood in the festive season. The stars will descend on Juhu Beach. Everybody but everybody will be there. And everybody will make it a point to gamble because traditionally, Bollywood celebrates Diwali with big card games in which a lot of hard cash is believed to be rolled. Plus there will be the attraction of Poker which is Raj Kundra’s fascination. If you have received their “Save the Date” notification, then RSVP the Kundras that you will be there. Go prepared. Debit cards, cheques and IOUs will not be honoured.