Advertisement
HomeBOLLYWOODEXCLUSIVEPeepingMoon Exclusive: Tejasswi Prakash knew I was upset, she came home at 6 am after Bigg Boss 15 finale instead of celebrating her win- Karan Kundrra

PeepingMoon Exclusive: Tejasswi Prakash knew I was upset, she came home at 6 am after Bigg Boss 15 finale instead of celebrating her win- Karan Kundrra

Karan Kundrra and Tejasswi Prakash have been painting the town red with their mushy romance ever since Bigg Boss 15 ended. Known as TejRan, they spent the first morning after the grand finale together. On Monday, they went on their first date too. Now, as the TejRan Army is curious to know what happened after the finale, PeepingMoon decided to put forth the query on behalf of them during an exclusive conversation with Karan.

The month of love has begun and like every TejRan fan, we too were curious to know what's Karan and Tejasswi's plan for their first Valentine's Day together. When asked whether he plans to officially propose to her, Karan said, "Maine national television pe hi propose kar diya tha. Humare parents ne sab dekha hai. Voh mere ghar bhi aayi thi. Of course, Valentine's day is going to be super special. I had some plans but madam ne Naagin 6 sign kar ke saare plans kharab kar diye. I am happy that she is busy with her work and is living her dream. I just want her to focus on that, rest I am always there for her. Main toh yahi hu, kaha jaunga." 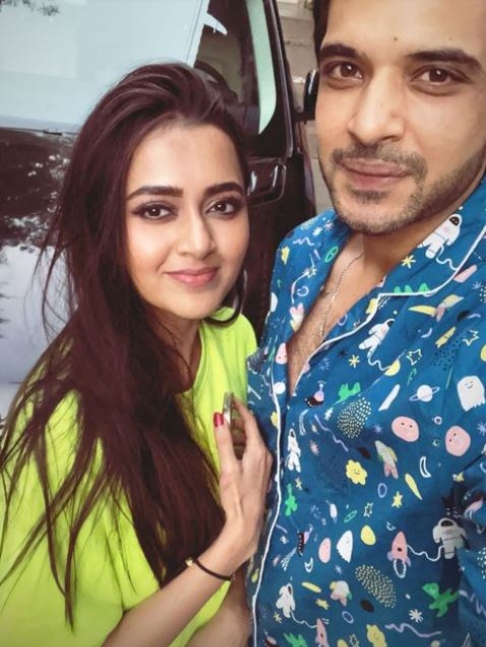 Is the much-awaited TejRan wedding happening this year? Karan shared, "We have just come out. Before the show ended, we were sceptical about a lot of things. Ek darr tha ki pata nahi bahar jaake kya hoga, kaise react karenge, and whether we are compatible enough. Humare dimag mein doubt aur darr dono tha. Hum yeh bhi soch rahe the ki kya bahar aane ke baad hum change honge. But even after the grand finale ended, Tejasswi was only thinking about me. She landed at my place at 6 in the morning because she knew I was upset. These little things show that everything is alright. After completing all the formalities, instead of thinking of her winning moment and celebrating it, she thought about me. We've been talking to each other every day. She had dinner last night with my parents and I met her parents too. Initially, we were worried, but hereon we will get stronger. We would like to take our relationship forward. I hope things go fine and our relationship progresses naturally. Tejasswi and I have been real and whatever has happened inside the house happened organically. We'll keep it like that and fingers crossed yaar.

Talking about getting offers to work with Tejasswi, Karan told, "A lot of people are waiting to see us together. It was Tejasswi's dream to work with Ekta Kapoor ma'am and she got one of the biggest shows on television. I would like her to focus on that and now, she'll be left with very little time as a lot of work goes behind making such shows."