There has been a lot of speculation regarding Samantha Ruth Prabhu’s Bollywood debut ever since she made her striking presence on the Pan-India level with her spectacular performance as rebel leader Raji in Amazon Prime India’s global hit, The Family Man Season 2. The Tamil-Telugu actress—known for her strong female characters in films such as U Turn, Mahanti, Rangasthalam, Oh Baby!, and Super Deluxe, to name a few—has lately been on the radar of many filmmakers in Mumbai, with dozens of offers having come her way since the news came out about her Bollywood plan. A range of rumours have surfaced in the media claiming various films as her Hindi feature debut, but none have so far been confirmed, with her team clearly stating that Samantha hasn’t signed any Hindi film as yet. But that appears to have changed in the last month, as we learned the Theri actress has finally secured her first Hindi film.

Peepingmoon.com has exclusively learned that Samantha Ruth Prabhu has signed her debut Hindi film with Ayushmann Khurrana. It’s a big, commercial project put together by Dinesh Vijan of Maddock Films and will see the two superstars from the Hindi and South Indian film industries come together to narrate a story that’s unique, intriguing, and has an ample dose of humour and suspense. Sources close to the development have revealed that the paperwork on this film has been completed and the makers are now discussing shooting timelines with the actors' respective teams. Everything is being kept hush-hush at this moment, including the director's name, but sources confirm it’s very much happening and might get off the ground towards the end of the year. 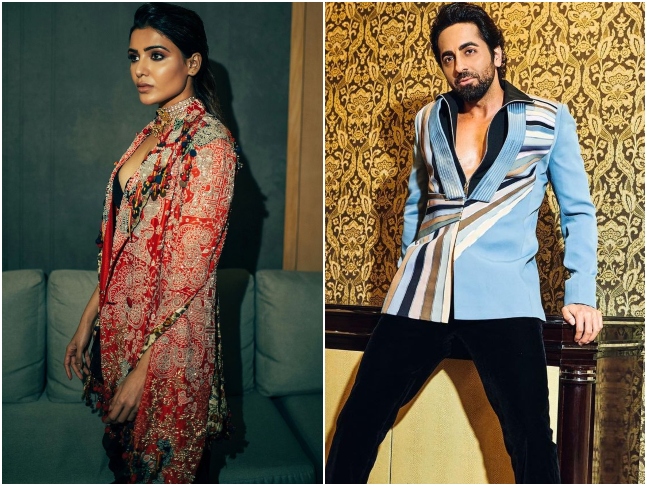 "Samantha has been working in films for the last 12 years and has an illustrious filmography behind her. So when she was seriously contemplating her Bollywood career after earning accolades and awards for her performance in Raj & DK’s espionage thriller series, she was looking for projects that would be exciting enough for her to take time off from her career down South. She has been offered dozens of films and web shows in the last 8–9 months, but only a few of them could titillate her even for consideration. Dinesh Vijan’s film is one of the most exciting scripts Samantha has come across, and there is no way she could have passed it on. It’s a perfect Bollywood launch for Samantha as she will be playing the central character in the film alongside Ayushmann Khurrana in a parallel lead," an industry source told us, adding that Maddock Films is planning to mount it on a big scale and release it sometime in late 2023. The film, we believe, will get into production once Samantha completes her current commitments and Ayushmann is done shooting for Raaj Shaandilya’s Dream Girl 2, which rolls next month in a North Indian city.

The Dinesh Vijan production aside, Samantha has signed one more Hindi film. The second one, sources say, is an ambitious mythological epic, scheduled to go on floors sometime in 2023. (More on this later.) The actress is also in talks with Taapsee Pannu for a female-centric thriller under her banner, Outsiders Films, and while she has shown her interest and is seriously thinking of taking up that project, nothing has materialised on paper as yet. It’s the same for her recently rumoured film with Akshay Kumar. Dharma Productions has reportedly approached her for an Akshay Kumar film, but it’s still in the discussion stage and nothing can be said definitively at this moment.

Stay tuned to Peepingmoon.com as we come up with more exclusives on Samantha’s Bollywood films.