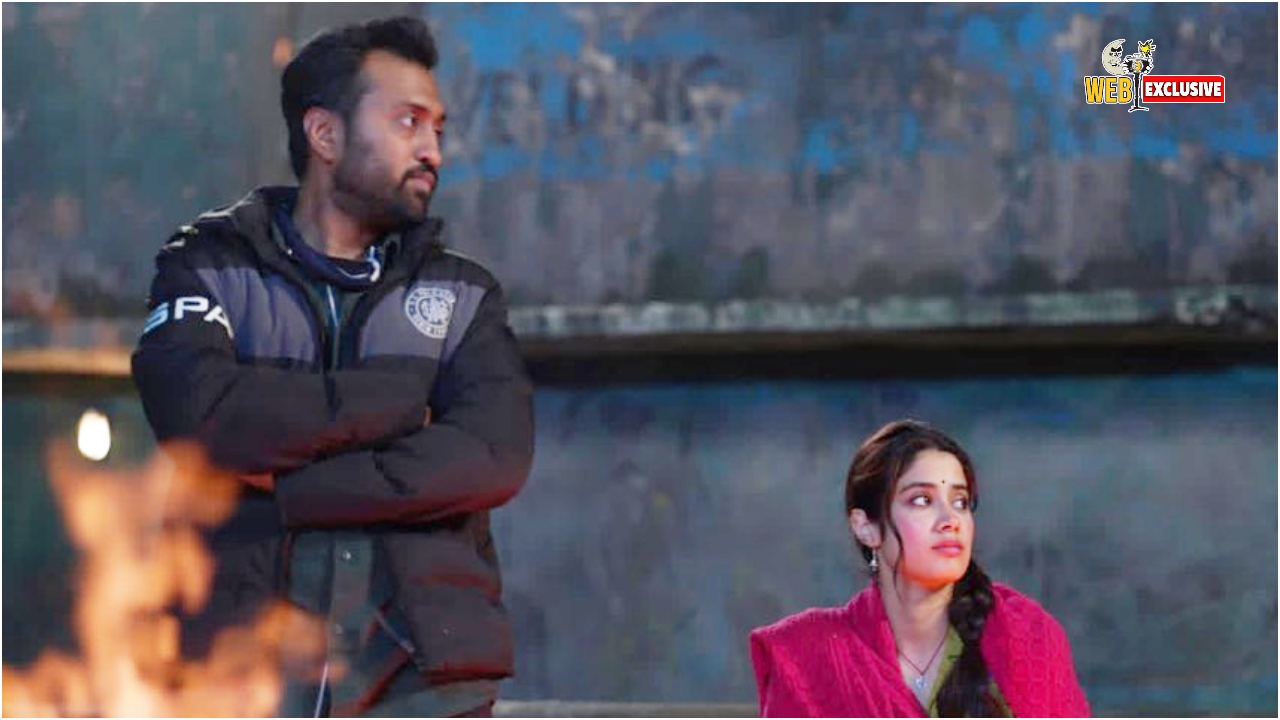 In an exclusive interview with PeepingMoon.com, Siddharth spoke about picking Janhvi to shoulder the film, working with Deepak Dobriyal, bringing Aanand L Rai’s cinematic feel to Good Luck Jerry and getting the Bihari and Punjabi accents bang on target with the film. He also spoke about the Tom and Jerry metaphor used in the film and assigning animal instincts to all his characters.

Good Luck Jerry has received rave reviews and everyone is appreciating it, how does it feel to have a winner on your hands that too your debut film?

I am very excited and happy not only for the debut but also for receiving such a reaction as you’re always scared of how it will be received, especially when it is an OTT release you really don’t know but when the reaction is so crazy, Twitter is flooding with love and so is Instagram an Facebook, then you know that something good is happening.

You’ve expertly taken over the mantle of showing Aanand L Rai’s world of cinema through Good Luck Jerry in an entirely different setting which is away from the romantic comedies. How did you go about it that too in your directorial debut?

The thing is that the genre is very different. I had met Aanand sir two years back and I met him for direction and not as an assistant director and at one place I love his cinema, love watching his films but I am a very different director, the kind of films I took myself with to him was also very different, thriller, that was also something that Colour Yellow had never done so he loved that fact. So when the remake also came in we felt that this is not very gullible. The film is a black comedy so he felt that during the pandemic when things stopped and we can’t go ahead with the project that we were planning to which was bigger in size so he thought of getting me this. I was initially very skeptical but after watching it I realized that there is a huge scope to completely turn in around and changed it completely. The original was so Tamil in it with Tamil humour and character that if I remake it, it will fall flat. So we knew that it will not work so that gave us the challenge to change it so which we realized that it will be totally different. So the only similarity between Aanand Sir’s cinema and my film is the small town setting that is all and he also wanted me to find myself in it.

The film is the remake of Nayanthara’s Tamil comedy, why did you choose a remake for your directorial debut? Were you apprehensive of the comparisons between the original and your film?

I was not apprehensive about the comparisons but was apprehensive about doing a remake that is only because I thought I am newcomer. Generally a newcomer is never given a remake to direct, usually the original director helms the remake or some senior director steps in because it is a much more responsible job, but it was very nice of Aanand Sir that he believed in me and gave me this opportunity. I made sure that I go away from the original as much as possible and that was a need for the film to work so we only took the story from Kolamavu Kokila, and turned it around to give our own treatment. So when Pankaj Matta, my scriptwriter started writing we only met once because it was during the pandemic, we watched the original only once and then we unlearned all of that. We straightaway met after almost two months and he gave me a draft and from there we started changing furthermore and slowly we started putting in the location; it was the other way round, it wasn’t as if we decided on the location first and then wrote the story. So everything was about to go away from the original so I was more excited rather than being skeptical or apprehensive.

Although Good Luck Jerry and Udta Punjab’s premise is totally different but when the latter released there were a lot of backlash, so were you worried about comparisons between the two films or criticisms that could have come your way?

I never thought or realized this when we were making the film. We never took it as a film about drugs. Our film is about a family, about three women and a very emotional story; Udta Punjab is a very serious subject purely on the drugs issue but here drugs are only in the backdrop or a tool to tell the story; rather than peddling the drugs she could have turned to do something else, maybe smuggle something else and the story would have remained the same. We didn’t realize like that.

Currently, Bollywood has been in the limelight for all the wrong reasons and especially because of the drug related case. Would you like to share your thoughts on it?

Honestly, I have not even entered that Bollywood that so can’t comment on that. But when these things were going on I was in the middle of shooting my film and I used to message Jahnvi about the scenes saying that you will take drugs from this place to that and she was like ‘what are you messaging, what is this?’ and later on I had to clarify to her that these are scenes from the film. Otherwise there is nothing much I can comment on.

How did you zero down on Janhvi Kapoor to play the lead since she is a young star and to shoulder a film without a male lead per se, what made you trust her?

One important thing was that the original had Nayanthara who is a huge star in south India, a very matured actor and one of the finest that we have currently. So I wanted a complete contrast, my character which my writer penned down was a young girl, more naïve, more innocent than what Nayanthara played, a 24-years-old girl coming from a very simple background so this changed the character completely. So who’s there in that age group? So my characterization only changed my options; so in that options I felt Janhvi was the best and that was primarily due to two reasons, first because most of the films in which I had seen her she played vulnerability really well and people have given her those vulnerable characters whether it was Gunjan Saxena or Roohi, that vulnerability comes to her naturally and when I saw Ghost Stories, I saw Janhvi pick up an accent and when I asked her how she did that she said that it was her house help’s accent, a Kannadiga mixed with Bandra Hindi, that also impacted me a lot as I thought that she has the knack to pick up accents. Hence I told Aanand sir that she is our best option and we should go and meet her, once we narrated the script to her she was very happy. I was more sure about her when the second time I met her she asked me, “Will I be able to do this?” and I was more nervous than her as it was my first film but at that point of time we felt as we were equals and we gave her diction classes, sent her pictures from the location to get her in the role.

The film has also received accolades for staying true to the accents used in the film whether it is Bihari or Punjabi without going the stereotypical way. How did you ensure that your actors got the dialect right? Was it a mandate for you and the cast to not make a mockery out of it?

I am really happy about it that people have felt this way after watching my film. I am born and brought up in Jharkhand do my ears are very sharp so I told Pankaj that let me bring my best game and you get your best game. He is a Punjabi from Haryana so he got these Punjabi characters and I got three Bihari characters. We casted actors who are from Punjabi and Hindi belt, we casted the younger sister from Patna and gave her diction classes because her Bihari went very sing-song so I told her that you have to unlearn and learn Punjabi now, because you’re living in Punjab for 10 years now in the film so you need to have your dialect somewhere in the middle. I only knew that this sing-song irritates all of us, our ears were sharp and this just happened not realizing that we are invariably bringing ourselves into the film, we were not getting influenced by any other film, it was just us who knew how things are spoken so mockery happens when you’re influenced by other’s cinema.

Could you tell us about the title of the film and the Tom and Jerry character that you have in the film?

The idea did come from the cartoon series Tom and Jerry. The characters started coming when Pankaj and I started brainstorming. The character of Jerry is all about survival and how that little mouse survives every time so that was the idea behind it; in my Jerry’s world there are so many Toms, Jerry in the film is Janhvi and her family and everyone else is a Tom. I also tried to give each character some animal instinct, I told Jaswant Singh Dalal who plays Timmy that you have to be intimidating as a cat, you always have to be serious and ready to pounce, let others joke around you but you’re not supposed to do that. Similarly, Deepak Dobriyal’s character in my head was a desi cock, Sushant Singh was a bull, Neeraj Sood was a crow in my mind who was always sitting on the roof looking at the house below trying to get in, it was all a director’s perception but Jerry was definitely about the survival instinct and that translates in the story as well as on the screen.

How was your experience of working with Deepak Dobriyal?

I was blessed to have him in the film that too in my first film. I have worked as an assistant director so I have seen actors not listening to you, harassing you, sometimes you get nervous but my actors were all with me, enjoying with me and helping me and Deepak bhai is somebody you have to unleash. He will never go out of the way or the script but once you unleash him he will surprise you with his act. You can’t direct him. His character Rinku, is 30% written and 70% improvised by him. He will take a fun dialogue and then add his tadka to it. The whole rap ‘Budhi Ma’ was written by him as well as the credit song, he even sang it. It was wonderful working with him, he is a highly underrated actor and tremendously talented.