Advertisement
HomeTELEVISION NEWSEXCLUSIVE NEWSPeepingMoon Exclusive: I had signed a web show, locked the dates too but turned it down as they wanted me to perform intimate scenes- Himanshi Khurana

PeepingMoon Exclusive: I had signed a web show, locked the dates too but turned it down as they wanted me to perform intimate scenes- Himanshi Khurana

Himanshi Khurana is a busy bee. After dubbing for her Punjabi film Shava Ni Girdhari Lal, the actress-singer delighted fans by releasing her 5th music video with beau Asim Riaz titled Gallan Bholiyan. The song released on Friday and AsiManshi fans are super happy. On this occasion, PeepingMoon.com got in touch with Himanshi for an exclusive interaction.

In the exclusive interview, Himanshi opened up about AsiManshi's music video Gallan Bholiyan and teaming up with her beau Asim for yet another successful song. The Punjabi actress-singer further revealed that she was in talks for 2 web shows but turned them down as they required her to perform intimate scenes. Finally, another AsiManshi music video released today after a long time. Did you have any butterflies in your stomach?

We shot multiple music videos. I did many during the lockdown and we were waiting to release them at the right time. We shot Gallan Bholiyan in June and now, it finally released. AsiManshi ka gana ek saal baad aaya hai.

You have been doing music videos before and after Bigg Boss 13. Is it a challenge to keep reinventing yourself after a point?

I did multiple videos before and after Bigg Boss 13 as I was not very sure about doing films. A few years ago, the Punjabi film industry was growing. Now, the quality of films has improved so I signed Shava Ni Girdhari Lal. Having said that, sometimes you do feel bored. Same type ka music video ho jata hai aur aapko kuch naya karne ka excitement rehta hai. My next music video is an exciting one as I'll be doing Garba in it. We had planned to release it during Navratri. But due to some delay, we had to hold it back. Now, we are planning to release it during Navratri in March next year. Iss gaane ke liye bohot preparation hai.

You have done almost 5 music videos with Asim Riaz. Is it because you are comfortable with him or demand for AsiManshi's on-screen chemistry?

Yes, I am comfortable with him but that's not the main reason. It is the company's demand, they felt Asim and I are needed for this music video. Speaking of our chemistry, I think more than that the company and song's requirement matters. We don't share much screen space on the camera.  However, off the camera, we do spend a lot of time but on the set, we are thorough professionals. We don't talk much while shooting, zyada comfortable bhi nahi hona chahiye kaam karte waqt. Kaam ke waqt aisa na lage ki zyada hasi mazak ho raha hai.

You are already an established singer. Are you planning to expand your horizon and venture into Punjabi rap?

I never decide my next project beforehand. Whenever I get a good project, I carefully choose them. I focus only on one project at a time. Agar future mein rap ke opportunities aaye, toh I'll definitely do it.

Is there a Bollywood film or web show in the pipeline?

Actually, I was in talks for 2 web shows. There are certain boundaries that we set for ourselves and it becomes difficult to cross them. You have certain expectations from your career and the makers whereas they also have some expectations from you. I turned down 2 web shows because they required me to do some intimate scenes. One show was for Ullu app whereas the other was for Amazon. I was in talks for one show and the modalities were being worked out. For the other, I had signed the contract and locked the dates too. However, after all that, they told me about the intimate scenes part. I rejected both. I'm not comfortable with that. If something without intimate scenes come my way, I'll definitely do it. 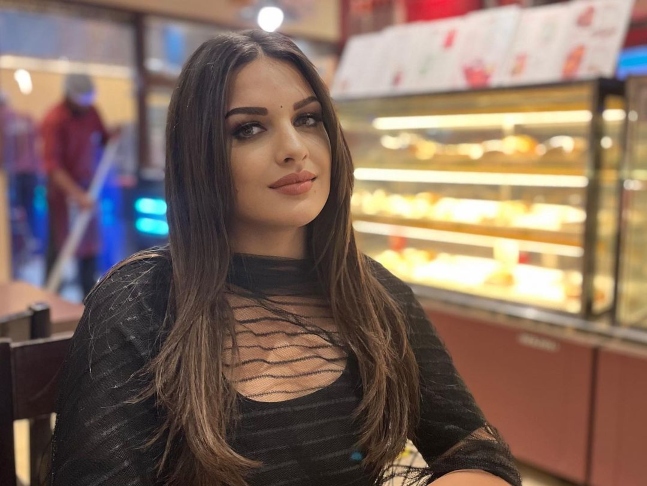 You will be celebrating your birthday (November 27) next month. Have you made any plans?

Firstly, I'll go on a vacation. I have been planning a trip to the Maldives for the last 2 years. Hopefully, I'll celebrate my birthday there.

Will Asim Riaz be with you?

Rumours were rife that Asim Riaz and you were approached for Nach Baliye. Is it true?

Yes, we were approached twice for Nach Baliye. I was in talks for Khatron Ke Khiladi too. However, I am hydrophobic. I told the makers about this during our video call. They asked me to learn to swim in a month or so. But I couldn't. Agar mujhse hoga hi nahi toh fir waha jaake time waste kyun kare? Speaking about Nach Baliye, Asim wasn't ready for it. If he didn't want to do it, then what's the use?