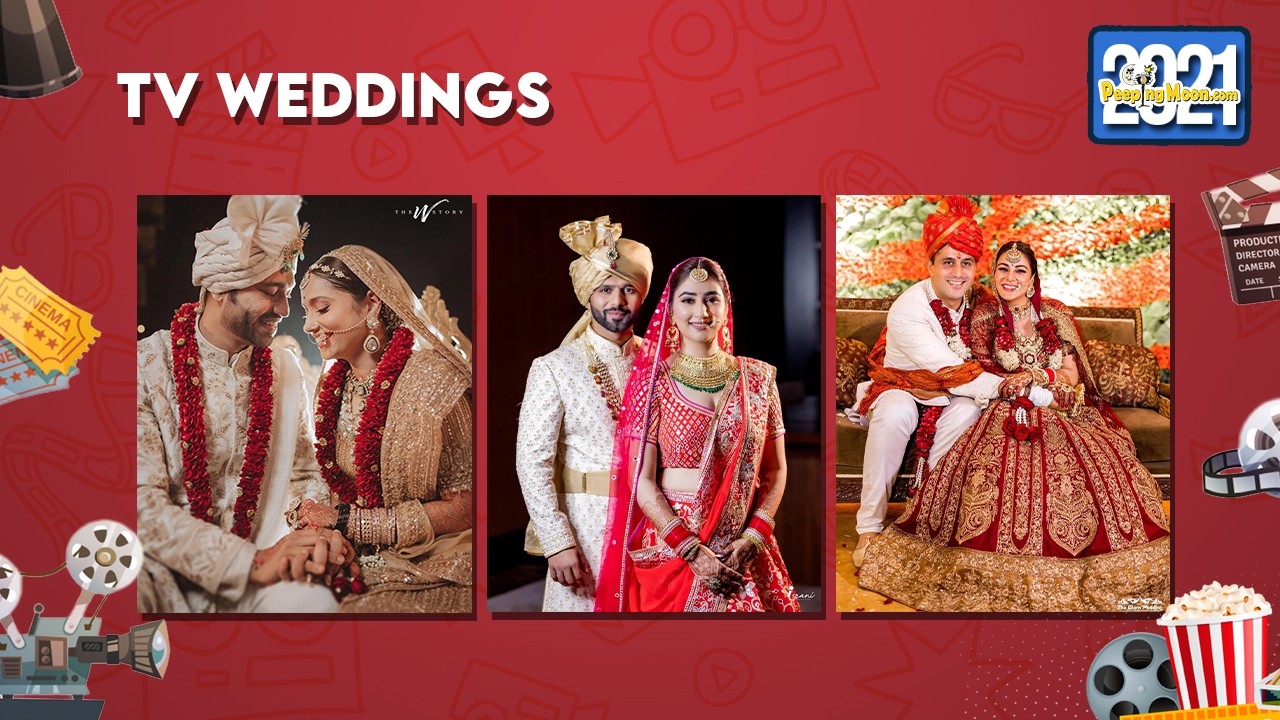 Television celebrities made 2021 a year of band, baajaa and baaraat. The COVID-19 pandemic couldn't dampen the spirits of lovebirds who decided to take the plunge, but with precautions. Celebrating companionship, some celebrities decided to go all extravagant while some opted for quieter ceremonies.

Now, as 2021 is coming to an end, let's take a look at those celebrity couples who tied the knot and painted tinsel town red. From Rahul Vaidya's lavish wedding with Disha Parmar, Shraddha Arya and Rahul Nagal's fun shaadi to Sayantani Ghosh and Anugrah Tiwari's simple marriage, these celebrities won hearts.

Karan Veer Mehra married Nidhi V Seth on January 24 at a Delhi gurdwara. Karan opted for formals whereas Nidhi was seen in a pastel-coloured lehenga. It was an intimate affair with only family members in attendance.

Sugandha Mishra and Dr Sanket Bhosale fell in love with each other on the set of The Kapil Sharma Show. After keeping their relationship a secret for a few years, they announced their wedding this year. Sugandha and Sanket got married in a close-knit ceremony on April 26 in Jalandhar. It was a grand affair and not many industry mates were called.

Divya Drishti actress Sana Sayyad tied the knot with her entrepreneur fiance Imaad Shamsi on June 25. For the nikaah, Sana looked gorgeous in an off-white and brown lehenga, whereas Imaad complemented her look with a matching sherwani. Her co-stars, Nyra Banerjee and Neha Adhvik Mahajan were present on the special day.

Pandya Store actress Shiny Doshi skipped a grand wedding ceremony and chose to keep it close-knit. She married her longtime beau Lavesh Khairajani on July 15. The actress wore a red saree and a red dupatta over her head. She paired her outfit with a choker, maang tika and nose ring. Lavesh wore a white dhoti and kurta with a red Nehru jacket. The wedding was attended by Vinny Arora Dhoopar, Dheeraj Dhoopar and Simran Budharup to name a few.

Rahul Vaidya and Disha Parmar's wedding was probably the first lavish and grand ceremony in tinsel town amid the COVID-19 pandemic. The singer had proposed to the actress on national television and it was a yes from her. Soon after Bigg Boss 14 ended, Rahul started preparing for his wedding with Disha. They tied the knot on July 16 in Mumbai. The DisHul Wedding has ceremonies like mehendi, haldi, sangeet, post-wedding lunch get-together and reception. Popular TV stars like Aly Goni, Jasmin Bhasin, Eijaz Khan, Pavitra Punia, Shweta Tiwari etc were in attendance.

Shireen Mirza's nikaah with her beau Hasan Sartaj took place in Jaipur on October 24. The actress's Yeh Hai Mohabbatein co-stars and friends Divyanka Tripathi-Vivek Dahiya, Krishna Mukherjee and Aly Goni were present. Shireen made for a beautiful bride in a red and golden lehenga. Hasan wore an off-white sherwani.

Shraddha Arya got married to Rahul Nagal, a naval officer, in Delhi on November 16. It was one of the grand weddings of the television industry. The actress was a ball of energy throughout the ceremonies. Instead of shedding tears, she was high on spirits and made for a 'bride-chilla'. The wedding was attended by Shraddha's Kundali Bhagya co-stars Anjum Fakih, Supriya Shukla and many others. Shashank Vyas was also present.

Kundali Bhagya actor Sanjay Gagnani tied the knot with his fiancée Poonam Preet Bhatia in an Anand Karaj ceremony at a Gurudwara in Delhi on November 28. The wedding was attended by Sanjay's co-stars Anjum Fakih, Supriya Shukla and Abhishek Kapur. For the Anand Karaj ceremony, Sanjay wore an embellished sherwani with a gold and cream coloured turban. Poonam looked stunning in a wine-coloured lehenga.

Neil Bhatt and Aishwarya Sharma fell in love with each other on the set of Ghum Hai Kisikey Pyaar Mein. They play ex-lovers in the show. Within a year of their roka. Neil and Aishwarya tied the knot. The traditional Hindu ceremony took place on November 30 in Madhya Pradesh. The couple hosted a reception in Mumbai for their friends. Rekha attended the event to bless the newlyweds.

Sayantani Ghosh tied the knot with her longtime beau Anugrah Tiwari in Kolkata on December 5. It was a simple and intimate ceremony with family members and only closest friends in attendance. The actress made for a beautiful Bengali bride in a red Benarasi saree. Later, a reception was held in Jaipur by Anugrah's family members.

One of the biggest weddings of 2021, Ankita Lokhande and Vicky Jain were a sight to behold. After dating for 3 years, they tied the knot on December 14 in Mumbai. Despite an injured foot, Ankita was the life of all the pre-wedding festivities. She was a cool bride who let her hair loose. AnVi Ki Shaadi commenced with Mehendi ceremony followed by haldi, engagement, sangeet and ended with a star-studded reception. Kangana Ranaut marked her presence at Ankita's sangeet.