In a scene of Pathaan, Shah Rukh Khan and Salman Khan, sitting together, discuss retirement plans but also wonder who’s perfect to be their successor. After a discussion, they conclude that there’s no substitute for them and rightly so. Taking a dig at trollers and proving why they are the last superstars of Bollywood, the Khan extravaganza Pathaan is here to set the screen on fire. Without any doubt, Shah Rukh and his charm 'abhi bhi zinda hai'. After remaining absent from the silver screen for 4 years 1 month and 4 days, the superstar has launched Missile Pathaan. The spy thriller produced by Yash Raj Films also stars Deepika Padukone, John Abraham, Dimple Kapadia and Ashutosh Rana.

Directed by Siddharth Anand, the film traces the journey of Pathaan (Shah Rukh Khan), the founder of Joint Operation and Covert Research (JOCR). For the world, he is dead. Cut to a few years back in history, we’re introduced to Pathaan’s nemesis Jim (John Abraham) who operates Outfit X. Rubai (Deepika Padukone) joins him in the mission to defeat Jim by informing Pathaan about a virus-like chemical called Raktbeej. Pathaan has a legacy to carry forward after Tiger (Salman Khan from the Tiger franchise) and Kabir (Hrithik Roshan from War). His charm and good looks have the potential to win hearts, but is it safe for him to trust people around him?

Shah Rukh ends his vanvaas with a film that relies too much on his shoulder and stardom. There are ample moments where suspension of disbelief plays a key role but that's not sufficient for the film to be declared a masterpiece. The loopholes are prominent and that's when the glamour on the silver screen comes to the rescue. Siddharth, who delivered Hrithik Roshan-Tiger Shroff's War as his last blockbuster, makes an attempt to recreate similar over-the-top stunts. Some of them are ridiculously superficial.

While Pathaan scores great marks in the cinematic appeal department, it is funny to see missiles shot in the air without a concrete reason, the villain pulling helicopters with the help of a black suspension rope, and even jumping from one helicopter to another as smoothly as getting onto an escalator. There are multiple reasons why you could smell a replica of Happy New Year (Shah Rukh and Deepika's film) in one of the sequences. Convenience takes over story experimentation. More than intelligent, some of the intelligence agency employees come across as naive.

Having said so, what Pathaan targets is mass attention that comes with the perks of claps, hoots, whistles and firecrackers. One cannot take away the fact that the film looks gorgeous in every frame. Besharam Rang is one of the prettiest and hottest introductory songs Deepika has ever got. The action sequences are choreographed well, especially Deepika's combat scenes. Salman and Shah Rukh's reunion as Tiger and Pathaan is easily the best that the film could offer. It's humourous, quirky, relevant and loaded with insane action.

Shah Rukh is back! At his effortless best, he displays wit, his fit hot bod, sleek action moves and, of course, his drool-worthy dimpled smiles. The superstar's silver screen return was highly awaited and it was worth it all. Pleasing his fans, he delivers what was promised. With the entire focus on him, Shah Rukh steals all the cheers and claps without a doubt. His chemistry with Deepika lacked charm, though. Deepika, as Rubai, looks stunning. Rarely in Hindi cinema do we get to see women packing punches in tied hair and comfortable wear but the actress does it making it look more believable. As always, Deepika is responsible for adding sunshine to the screen.

A lot was expected from John but he sadly underperforms. The menace required in a villain of that caliber is missing. His fight sequences with Shah Rukh are good but the acting portions suffer. So does his screen time. Dimple Kapadia does a fairly decent job whereas Ashutosh Rana is a treat to watch.

Speaking of the VFX, a cleaner edit would have done the job right. It is pretty evident that the team made heavy usage of the chroma screen and the final output is, at certain points, not neat enough. Especially the truck fight sequence between Shah Rukh and John. 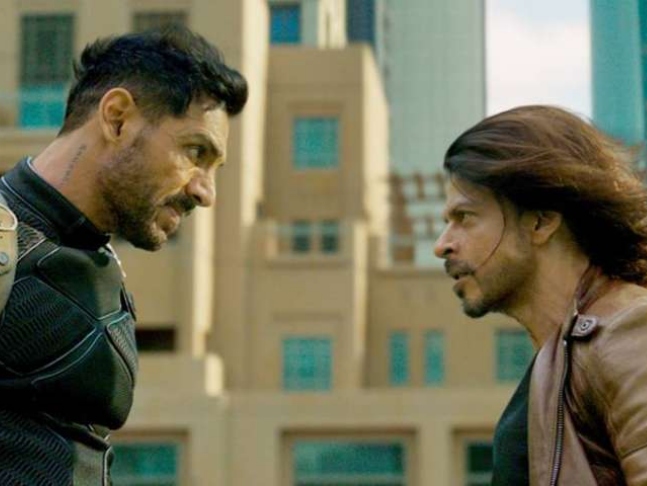 Pathaan can be easily classified as a cinematic joy with bumpy turns, thrilling highs and lows and a testosterone attack. A stronger story and solid graph to characters could have set it right on the track to becoming a masterpiece.