Atithi Bhooto Bhava Review: Pratik Gandhi and Jackie Shroff are unable to save this unfunny film on familiar friendly-ghost premise

There have been quite a few films with a friendly ghost at the centre (Chamatkar, Phillauri etc), who come to the aid of a living person while also finishing their incomplete work so that they can attain moksha and stop being in a limbo. Pratik Gandhi, Jackie Shroff and Sharmin Segal starrer Atithi Bhooto Bhava is a ghost story on the similar lines and employs several already-seen tropes that will make you remember all the previous such films.

Srikant (Pratik Gandhi) is a stand-up comedian who is in a live-in relationship with his girlfriend Netra (Sharmin Segal) who is an air hostess. Srikant takes care of the cooking and the household chores since he has more time on hand. The couple has been living together for four years and it’s apparent that their relationship has lost its spark with Srikant unwilling to propose marriage and Netra wanting to settle down in holy matrimony. However, their lives turn upside down when Srikant meets with a 55-year-old ghost, Maakhan Singh (Jackie Shroff) who claims that Srikant is his grandfather reincarnated. 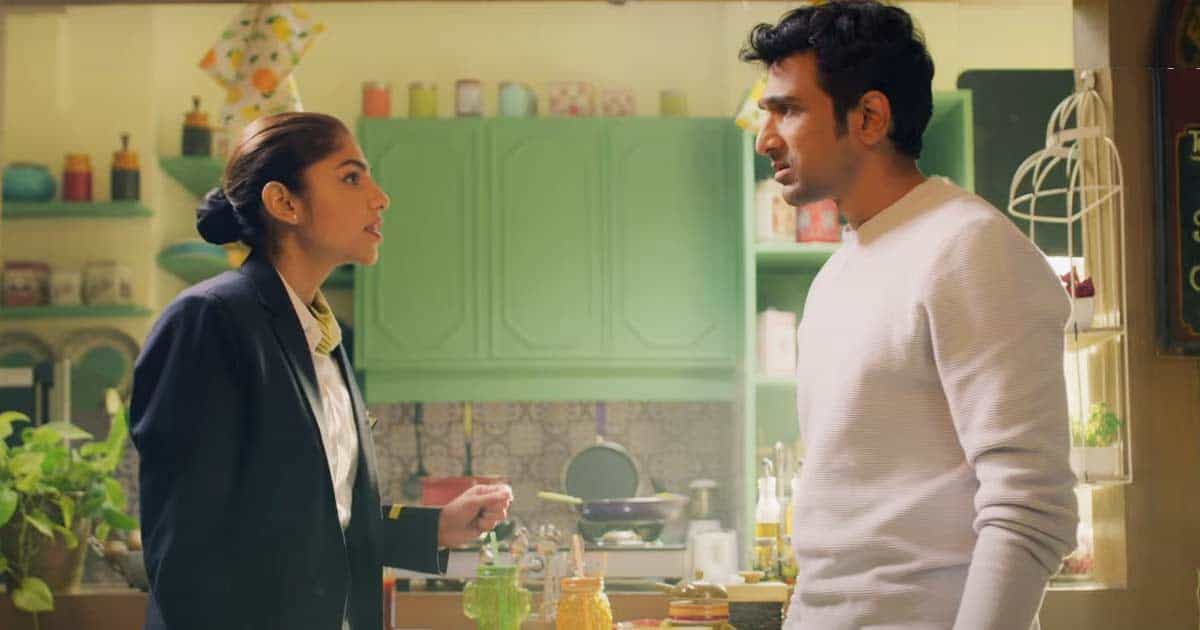 Maakhan Singh is stuck in limbo as he wants to meet his long lost love Manju while also trying to shell out relationship advice to Srikant to repair his crumbling relationship with Netra. The parallel love story might remind you of Love Aaj Kal. The trio takes a road trip from Mumbai to Mathura to find Manju along with Srikant and Netra’s common friend Sucharita (Divinaa Thackur) with a background score that changes beat as it moves from one city to another, which deserves a brownie point as it helps in imparting a look and feel to the film.

Atithi Bhooto Bhava’s screenplay attempts to be funny but fails to create any genuine laughs. For a stand-up comic, Srikant’s jokes and one-liners are not witty and the film often relies on clichés and stereotypes attributed to women which are just not in great taste anymore. There is too much preaching about true love being immortal and how important it is to profess love and not just be in love. The dialogues are also a letdown and the editing should have been crisper. There are several loopholes and unanswered questions throughout the film which will hanker at your sensibilities. There are far too many songs in the film, and it wouldn’t have been such a nuisance if they had been memorable, but alas, none of them will stick to you.

Director Hardik Gajjar who also directed Pratik in Bhavai could have given more scope for the actor’s performance to come through. However, Pratik as the ‘modern stud-dude’ is like fish out of water, especially in his drunk scenes. He does try to infuse some life into his character but he is not given enough leeway to make a lasting impression. He can only do so much to lift a hole-ridden screenplay. Jackie Shroff on the other hand, seems to be having fun as he must have figured out that the role would be a breeze for him and it shows in his performance. His dialect is more on the Mumbai-lines than a Sikh. Also, why did the director bring in Anuradha Patel but did not give her much screen time that too without dialogues remain a mystery. Maybe, she could have infused some life into the dead-pan story. Sharmin tries hard to emote but her lack of expressions and dialogue delivery fail to make a mark. Divinaa Thackur is lively but her character is not given much scope to perform.